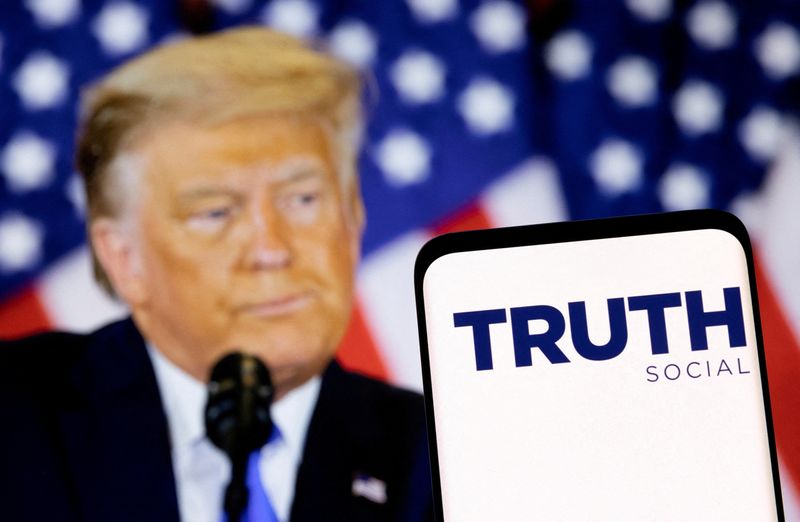 © Reuters. FILE PHOTO: The Truth Social network logo is seen on a smartphone in front of a display of former U.S. President Donald Trump in this picture illustration taken February 21, 2022. REUTERS/Dado Ruvic/Illustration/File Photo

NEW YORK (Reuters) – Individual investors like Tony Alvarado have been a blessing and a curse for Donald Trump’s social media company.

Trump Media & Technology Group (TMTG) – which operates the Truth Social app co-founded by the former U.S. president after he was banned from Twitter (NYSE:) – reached a valuation of as much as $15 billion in October 2021 thanks to Alvarado and hundreds of thousands of other investors.

Those investors scrambled to buy shares in Digital World Acquisition Corp, the special purpose acquisition company (SPAC) that signed a deal in October to take TMTG public. Digital World’s shares rallied as much as 1,650% that month, making it the most valuable SPAC of all time.

A year later, Digital World shares have shed most of the gains as regulatory and potentially criminal investigations weigh on the prospects of its deal with TMTG, now valued at just over $2 billion.

“To be perfectly honest, I treat it like a casino,” said Alvarado, a 44-year-old call center customer service manager from Orange County, California.

Individual investors, which comprise about 90% of Digital World’s shareholder base, have suddenly become an obstacle to the deal with TMTG being completed.

Digital World has not been able to get enough of them to vote for an extension of its life by 12 months, which it says it needs as it waits for the U.S. Securities and Exchange Commission to complete a review of the transaction.

The challenge has been to get shareholders to cast their votes rather than convincing them to vote in favor. Digital World’s shares, which closed at $22.40 on Monday, will each return $10.30 to shareholders if the SPAC liquidates, so a ‘no’ vote would go against their financial interests.

But while individual investors are adept at using apps like Robinhood (NASDAQ:) to buy shares, many are not as accustomed to voting their shares.

Alvarado said he had not heard about the shareholder vote before a Sept. 6 deadline. He added he had become disillusioned with the stock after he was left with only $200 of his original $872 investment. “Once you’ve already lost 77% of your investment, it’s easy to lose interest,” Alvarado said.

Digital World and TMTG representatives did not respond to requests for comment.

The deal’s woes have rattled Trump’s supporters who bought into Digital World because of him. Many have said in social media posts they will stick with the stock.

“I’ve lost $154,000 this year … and I’m down 85% on my remaining life savings. I’m still not giving up but it hurts really, really, badly,” one Reddit user describing themselves as an “honorable disabled veteran” posted on the platform.

Despite the missed deadline, the vote on the extension of Digital World is still on.

When the SPAC realized on Sept. 6 it did not have enough votes to reach the required 65% threshold of shareholders backing the extension, it pushed the deadline to Sept. 8.

When it still fell short, Digital World delayed the vote again, first until later that day and then to Oct. 10. It could extend the vote further if chooses.

Digital World can tap into the $293 million in its trust to pay for its campaign to reach shareholders, but SPAC managers must reimburse it if the merger with TMTG does not happen – a significant risk given the probes into the deal.

The SPAC has already spent $12 million for the deal so far, according to a regulatory filing.

The SPAC managers handed over $2.85 million to Digital World’s trust this month – in a move that allowed them to unilaterally extend the SPAC’s life, without shareholder backing, to Dec. 8. They borrowed that money, according to a person familiar with the arrangement.

A $1 billion private placement that Digital World raised for the TMTG deal last December allows investors who participated to terminate their commitment on Tuesday. It is unclear how many investors will do so and whether Digital World will seek new investors to replace them.

The private placement constituted most of the $1.3 billion cash infusion that TMTG was set to receive as part of the deal.

When the vote failed on Sept. 6, Digital World’s proxy solicitor, Saratoga Proxy Consulting, pushed a call center of 100 people plus 40 of its employees into overdrive to contact shareholders and help them vote, the sources said.

Between Sept. 6-8, the team tracked down investors, phoned and emailed them and assisted with voting, fueled by coffee, pizza and donuts, one of the sources added. They got about 40% of Digital World shareholders to vote in favor of the extension, sources told Reuters at the time.

Saratoga sent Digital World Chief Executive Patrick Orlando an invoice for $200,000 last week for its services and informed him that getting to the required threshold would cost hundreds of thousands of dollars more, a person familiar with the matter said. Orlando told Saratoga he could not afford to pay the invoice and any future bill, the source added.

Digital World disclosed last Friday it hired a new proxy solicitor, Alliance Advisors LLC, which it agreed to pay a fee of $10,000 plus additional expenses on a pre-approved basis.