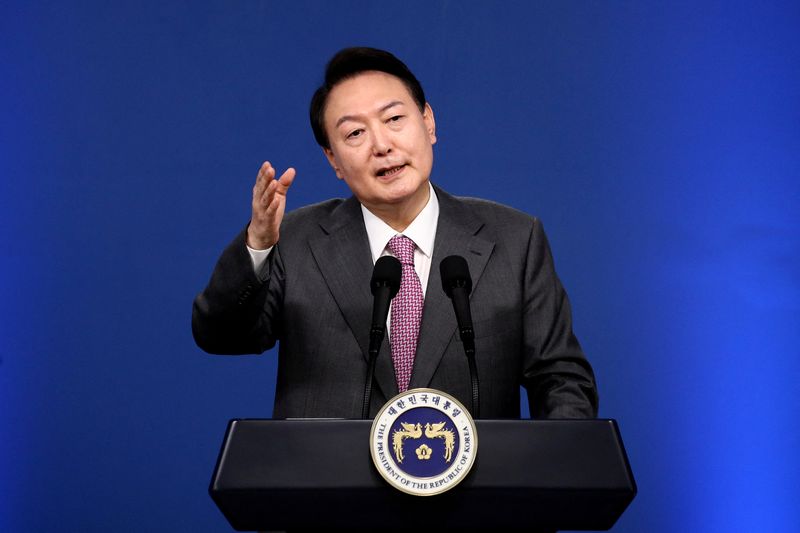 Yoon, who was in London for the funeral of Britain’s Queen Elizabeth, departed for New York late on Monday to attend the U.N. General Assembly. He will fly to Canada on Thursday for the last leg of his trip before returning home on Saturday.

In New York, Yoon will hold a summit with U.S. President Joe Biden where both leaders are expected to discuss North Korea’s growing weapons threats, and mounting concerns in South Korea over the Inflation Reduction Act (IRA), signed by Biden last month.

The new law eliminates federal tax credits for electric vehicles (EVs) made outside North America, meaning companies including Hyundai Motor Co and its affiliate Kia Corp will no longer be eligible for such subsidies.

The law has sparked complaints from government officials in Seoul, who see it as a betrayal of Biden’s vows to boost bilateral economic ties after South Korean companies agreed to make major investments and build factories in the United States.

Seoul officials have said the law may violate a bilateral free trade agreement, and they have asked Washington to postpone the new rules until Hyundai completes building its Georgia factory in 2025. Yoon is likely to reiterate that request during the upcoming summit.

A number of high-level South Korean officials have been mobilised in recent weeks to relay concerns to their U.S. counterparts and press for exemptions, though solutions are far from clear. Trade Minister Lee Chang-yang will travel to the United States this week to discuss the IRA, the ministry said on Tuesday.

U.S. national security adviser Jake Sullivan told his South Korean counterpart Kim Sung-han early this month the IRA would bring “more pluses than minuses” to Korea but promised to review the impact of the new rules.

“It’s structurally quite complicated because it’s already signed into law, but there is a way to go about it,” a senior South Korean official closely involved in the discussions said on condition of anonymity due to the diplomatic sensitivity of the issue.

When asked about the IRA, Yoon’s senior economic secretary, Choi Sang-mok, said neither side had yet set an agenda for the summit but could discuss the issue in light of its importance.

Yoon has also been struggling to make headway on other key diplomatic and security issues such as improving relations with Japan and enticing North Korea back to denuclearisation talks.

Yoon’s office said he plans to hold his first bilateral meeting with Japanese Prime Minister Fumio Kishida in New York, though some Japanese media reports suggested the meeting may not happen as legal fights over historic disputes remain unresolved.

South Korean Foreign Minister Park Jin met with his Japanese counterpart in New York on Monday, where he asked the Japanese to work together with Seoul to resolve their differences, Park’s office said in a statement.

According to a senior official at Yoon’s office, the president also plans to use his speech to the U.N. General Assembly to reiterate the need for North Korea’s denuclearisation, with Pyongyang rejecting Seoul’s recent overtures and talks remaining stalled.

A diplomatic source told Reuters that Seoul and Washington are exploring how to reopen denuclearisation talks.

“Our responses to the North’s recent moves have been low profile, which is intended in order to not give the level of attention they want,” the source said, requesting anonymity due to the sensitivity of the issue.

“But we’re sending a clear message that another nuclear test would trigger real repercussions, even harsher than the biting resolutions and measures taken after the sixth test and long-range missile launches.”