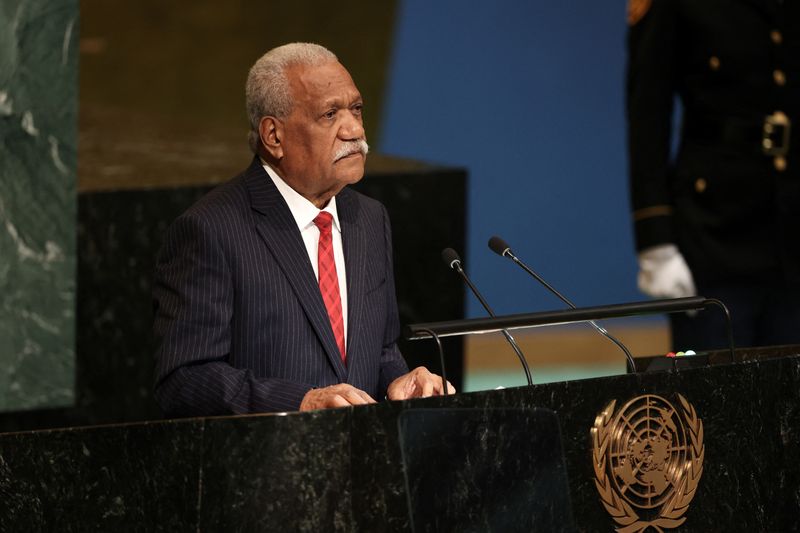 By Daphne Psaledakis and Michelle Nichols

UNITED NATIONS (Reuters) – Countries on the front lines of the climate crisis are fed up.

During the annual gathering of world leaders at the United Nations this week, low-lying island nation Vanuatu stepped up a fight to get the world to focus on combating global warming by calling for a fossil fuel nonproliferation treaty.

“The time is up – action is required now,” Vanuatu’s President Nikenike Vurobaravu told the U.N. General Assembly on Friday.

The treaty would aim to scale down coal, oil and gas production to limit the rise in temperatures to the globally agreed 1.5 degrees Celsius (2.7 degrees Fahrenheit).

It would also “enable a global just transition for every worker, community and nation with fossil fuel dependence,” said the leader of the carbon-negative country.

A U.N. climate science panel – the Intergovernmental Panel on Climate Change (IPCC) – has warned that global emissions are on track to blow past the 1.5 degrees C warming limit and reach some 3.2 degrees C by the end of century.

Vanuatu has also asked the International Court of Justice to issue an opinion on the right to be protected from the adverse impacts of climate change, a move that Vurobaravu said “is not a silver bullet for increasing climate action, but only one tool to get us closer to the end goal of a safe planet for humanity.”

In Pakistan, devastating floods this month engulfed large swaths of the country, killing more than 1,500 people and causing damage estimated at $30 billion. Pakistan’s Prime Minister Shehbaz Sharif asked world leaders why his people were paying the price of global warming.

“Pakistan has never seen a more stark and devastating example of the impact of global warming. Life in Pakistan has changed forever,” Sharif told the General Assembly. “Nature has unleashed her fury on Pakistan, without looking … at our carbon footprint.”

Around the world on Friday young activists rallied for climate action, staging protests from New Zealand and Japan to Germany and the streets of New York to demand rich countries pay for global warming damage to the poor.

The protests take place six weeks before this year’s U.N. climate summit, known as COP27, where vulnerable countries plan to push for compensation for climate-related destruction to homes, infrastructure and livelihoods.

“We renew our call to the world to declare total war on this century’s greatest challenge: the climate change monster. And yet, after all these years, the world has failed to break our addiction to fossil fuels,” Marshall Islands President David Kabua told the U.N. General Assembly on Tuesday.

Philippines President Ferdinand Marcos Jr. said the least responsible for climate change are suffering the most.

“The Philippines is a net carbon sink, absorbing more carbon dioxide than we emit. And yet, we are the fourth most vulnerable country to climate change,” he told the U.N. gathering.

U.N. chief Antonio Guterres on Friday warned that the world is “not even close” to making enough progress on climate change, telling a meeting of Pacific Island leaders: “Those who did nothing to create this crisis are paying the highest price.”

Guterres has also urged rich countries to tax windfall profits of fossil fuel companies and to use that money to help countries harmed by the climate crisis and people who are struggling with rising food and energy prices.

The United States and China are the world’s biggest carbon emitters. On the fight against global warming, U.S. President Joe Biden warned at the United Nations this week: “We don’t have much time.”

Fiji Prime Minister Frank Bainimarama condemned the climate war as being fought with “apathy, denial, and a lack of courage to do what we all know what must be done.”

He appealed for the world to step up.

“Fiji is ready to make the coming years count for our people and for the planet – our question to you is this: Are you with us? Don’t tell us yes unless you plan to show it.”