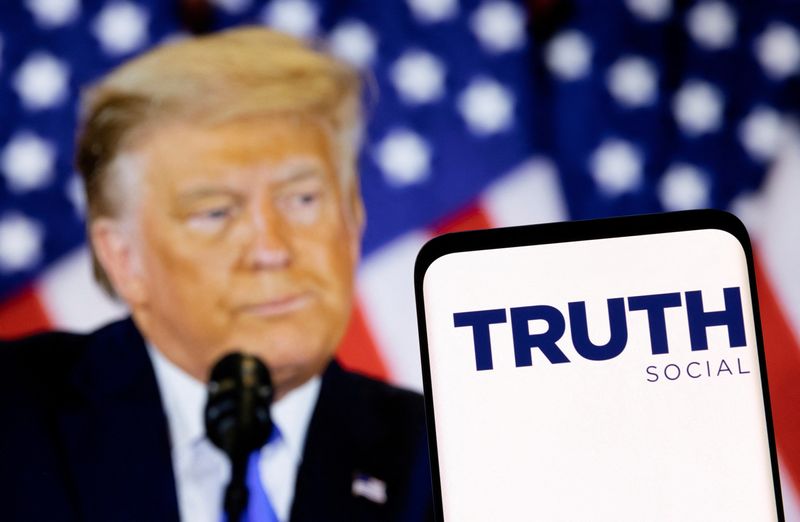 © Reuters. FILE PHOTO: The Truth social network logo is seen on a smartphone in front of a display of former U.S. President Donald Trump in this picture illustration taken February 21, 2022. REUTERS/Dado Ruvic/Illustration/File Photo

Digital World said it had received termination notices from private investment in public equity (PIPE) investors ending nearly $139 million in investments out of the $1 billion commitment it had previously announced.

Investors, who signed the PIPE commitment about one year ago, are free to move their money after the Sept. 20, 2022 deadline if the deal has not completed.

Digital World did not disclose the investors that pulled out. Sources told Reuters Sabby Management, which had committed $100 million to the PIPE, is one of the investors who have terminated.

More investors could pull out in the next few weeks, sources said, as they can terminate anytime after the deadline. Many are waiting for DWAC to propose more preferred terms to PIPE investors, sources added. The deal between the special purpose acquisition company (SPAC) and Trump Media and Technology Group (TMTG), which owns Truth Social, has been on ice due to civil and criminal probes into the circumstances around the agreement.

TMTG did not immediately respond to a request for comment.

The SPAC had been hoping the U.S. Securities and Exchange Commission, which is reviewing Digital World’s disclosures on the deal, would have given its blessing by now. Digital World said this month it would extend the deal’s life by three months after its bid for a 12-month extension from its shareholders fell short.