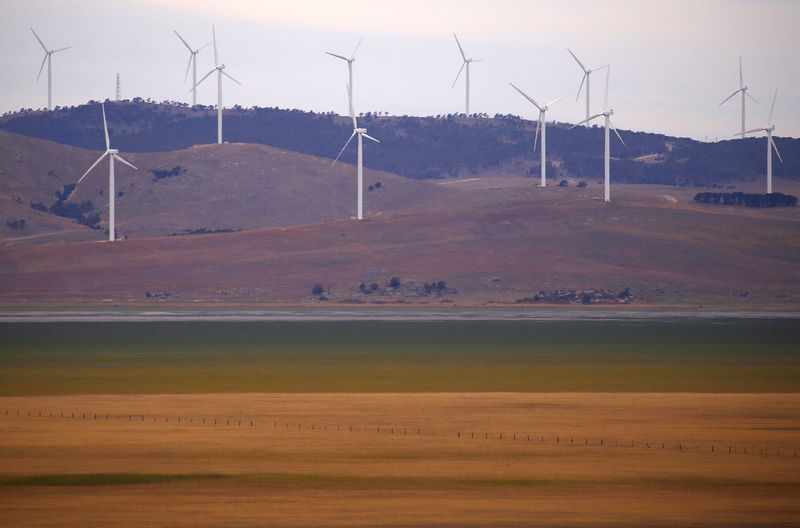 © Reuters. A fence is seen in front of wind turbines that are part of the Infigen Energy Capital Wind Farm located on the hills surrounding Lake George, near the Australian capital city of Canberra, Australia February 21, 2018. REUTERS/David Gray

MELBOURNE (Reuters) – Under a new government, Australia is shaping up to be the next big market for offshore wind developers, attracting interest from the likes of Shell (LON:), Denmark’s Orsted (OTC:) and Norway’s Equinor. But the industry, starting from scratch Down Under, faces a slew of challenges.

After more than a decade of weak climate action under conservative leaders, Anthony Albanese’s new Labor government has committed to net zero emissions by 2050 – a goal that aligns with states’ renewable energy goals.

To meet that target, the country will need 96 gigawatts of renewable energy capacity by 2035, replacing coal-fired plants that are set to close, and offshore wind will have to be part of that mix, Shell’s Australia chair Tony Nunan told Reuters in an interview.

Onshore wind power accounts for 10% of Australia’s electricity needs but the groundwork needed for offshore farms – which are much bigger and far more productive – is only just starting to fall into place after a law setting out a framework for their development was passed late last year.

The government has, however, moved quickly to launch a process for identifying offshore zones to be opened up for licenses. The first area proposed is off Victoria state’s Gippsland coast, with a final decision expected before the end of the year.

“We’re at the fairly early stages and a lot has happened in the last few weeks much faster than people expected and that’s attracted a lot of global attention,” said Tim Sawyer, chief international officer at Flotation Energy, which has a proposed project off the Gippsland coast.

To many in the industry, Australia could well become the next boom market for offshore wind.

Equinor, for example, sees Australia as one of its top three Asia-Pacific markets for offshore wind, behind Japan and South Korea and plans to use its South Korean projects as a template for Australia, said Lars Nordli, Equinor’s vice president for business development renewables Asia & Pacific.

However, the sector will need new regulations and beefed-up government departments to handle licensing and approvals. It will also have to develop a supply chain as well as workers’ skills for thousands of jobs in construction, operations and maintenance, industry executives said.

Projects, which typically take eight to 10 years to complete, will likely also need to overcome potential opposition from landowners concerned about transmission lines needed to hook into the grid onshore.

Community concerns about the impact of wind turbines on bird life, such as orange-bellied parrots, and sealife, such as fish and whales, are also expected.

“Each project will be assessed individually to make sure we protect our precious biodiversity while we harness our world-class offshore wind to generate clean energy,” Victoria’s energy minister, Lily D’Ambrosio, said in comments emailed to Reuters.

The industry must also lure suppliers of vessels, turbines and other related technology away from rapidly growing offshore wind markets in Europe and Asia – suppliers who may only come if there are several projects being developed around the same time.

“There’s only a limited number of vessels in the world that can be used for erecting turbines offshore. So you need to attract those vessels to Australian waters,” said Charles Rattray, CEO of Star of the South, the country’s most advanced proposed offshore wind project.

Flotation Energy sees opportunities to speed up development and cut costs by using oil and gas assets that are coming to the end of their lives in waters off Victoria, such as vessels that will be deployed for decommissioning oil and gas platforms.

“There’s a lot of opportunities from a petroleum industry that’s got 50 years of heritage in the region…to take part of that and evolve it into offshore wind,” Sawyer said. “I’d prefer we’re not taking 10 years to build a project.”

Shell, Orsted and France’s ENGIE, through its Ocean Winds venture with EDP Renewables, said they are watching the Victorian process closely.

The state, which has spearheaded the country’s offshore wind push, plans to procure 2 gigawatts (GW) of offshore capacity with supply due by 2032, enough to power 1.5 million homes. It is also targeting 4 GW by 2035 and 9 GW by 2040.

The 2.2 GW capacity Star of the South, on the drawing board for 10 years and now majority owned by Danish wind giant Copenhagen Infrastructure Partners, aims to be up and running in 2028.

“New South Wales has got much better options. It’s got much bigger electricity demand. All the coal is closing in the next 10 years, so you’ve got incredible grid infrastructure opening up,” said Oceanex Energy CEO Andy Evans, who was a Star of the South co-founder.

Oceanex, which has lined up Equinor as a partner, hopes to start producing power off New South Wales by 2030, he said.