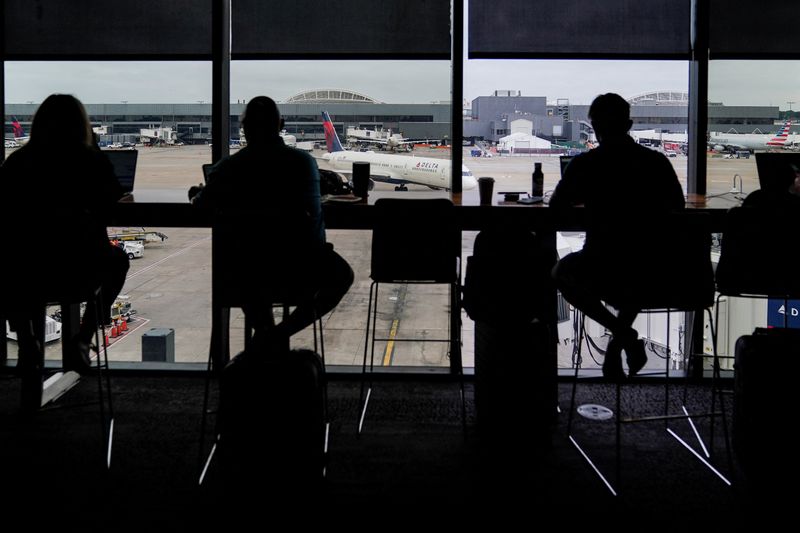 © Reuters. Passengers are seen in silhouette at a Delta Sky Club as an airplane parks at a gate in front of them at Hartsfield-Jackson Atlanta International Airport ahead of the Fourth of July holiday in Atlanta, Georgia, U.S., July 1, 2022. REUTERS/Elijah Nouvelag

This is the latest in a series of rules the Biden administration has proposed to boost airline consumer protections.

“My administration is also cracking down on the airlines,” President Joe Biden said at a meeting of his competition council Monday.

“You should know the full cost of your ticket right when you’re comparison shopping to begin with where you’re – what airline you’re going to fly with so you can pick the ticket that actually is the best deal for you.”

The White House noted in 2021 large airlines had $700 million in cancellation and change fee revenue.

USDOT said current requirements means consumers often receive information about fees after ticket purchases when they get confirmation “which is not sufficient disclosure.”

Last month, U.S. Transportation Secretary Pete Buttigieg told Reuters airline rules were in need of a “refresh.” Buttigieg has pressed airlines to improve customer service after tens of thousands of flight cancellations and delays this summer and posted airline responses to disrupted flights within their control on a government dashboard posted in August.

The administration also threatened new rules if airlines did not ensure young children could sit with parents.

In July 2021, USDOT proposed rules to require airlines to refund fees for significantly delayed bags and refunds for services like onboard Wi-Fi that do not work.

Under existing U.S. rules, passengers are entitled to a fee refund if bags are lost, but not when delayed.

USDOT has faced criticism from some for not doing more to hold airlines accountable.

“Americans are justifiably frustrated that federal government agencies charged with overseeing airline consumer protection are unable or unwilling to hold the airline industry accountable and to swiftly investigate complaints,” the state AGs said.