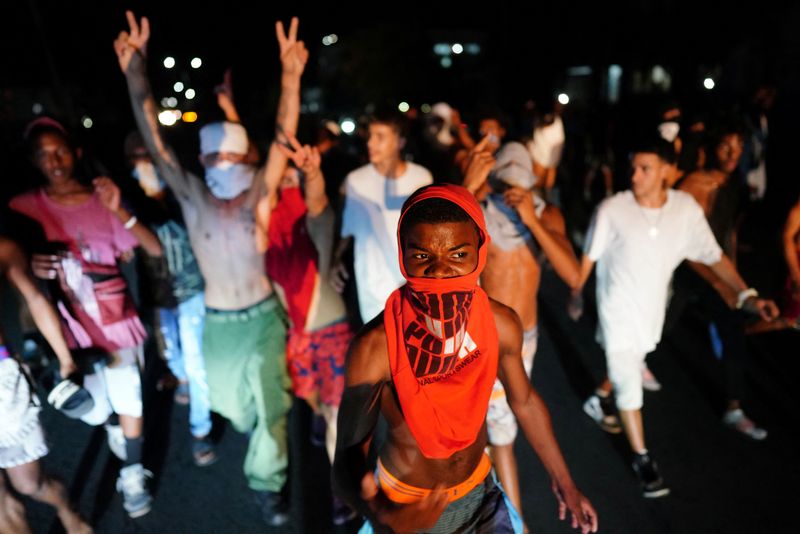 © Reuters. People shout slogans in a protest during a blackout in the aftermath of Hurricane Ian in Havana, Cuba, September 30, 2022. REUTERS/Alexandre Meneghini

By Dave Sherwood and Alexandre Meneghini

HAVANA (Reuters) -Crews restored power to more neighborhoods across Havana on Saturday after a second day of protests over ongoing blackouts in Cuba’s capital, including some of the largest demonstrations since widespread anti-government rallies in July 2021.

At least one of the protests Friday night in the western seaside borough of Playa swelled in size to several hundred people who chanted “turn on the lights,” as well as slogans disparaging President Miguel Diaz-Canel.

At one point, the group began to chant for freedom, or “libertad,” in Spanish, as protesters marched through a dark, densely populated district that has been without electricity since Hurricane Ian slammed into the island on Tuesday.

Reports on social media showed small protests had flared again at scattered locations across Havana and just outside the city on Saturday afternoon. The demonstrations, which remained largely peaceful, appeared confined to those places where power had not yet been restored.

The majority of city residents, whose electricity supply had returned, did not protest on Friday or Saturday.

“Little by little the power is coming back, and good thing,” said Jorge Mario Gonzalez, a 57-year-old postal worker in Havana. He said the power came back on at his home on Friday.

“The government is making a big effort but can’t satisfy everyone. We have so many problems.”

Ian knocked out power to the whole country of 11 million people when it plowed through western Cuba earlier this week. By early Saturday, officials said electricity had been restored to more than 82% of customers in Havana, a city of more than 2 million, but those still in the dark had grown increasingly anxious.

“It’s like being in hell,” said Carlos Felipe Garcia, who marched shirtless at the protest in Playa on Friday night, covered in sweat. “That’s why we´re out on the street, and we’ll keep coming out.”

Officials said on Friday they hoped to have the lights back on across most of Havana by the end of the weekend – and appeared on track by Saturday afternoon. City officials have said the protests unleashed by the outages have hindered recovery efforts and have warned against blocking roads and vandalism.

As the demonstration in Playa late on Friday gained steam, it was met by several truckloads of security forces in black berets, who blockaded the main boulevard, preventing those marching from advancing, according to a Reuters witness.

Later an equally large group of hundreds of government supporters chanting “I am Fidel” – a reference to the late former leader Fidel Castro – followed behind the protesters on an adjacent street. The men, many wearing pants and T-shirts, were armed with sticks, baseball bats and scrapwood.

No clashes or arrests were observed.

Street protests in communist-run Cuba are very rare. On July 11, 2021, anti-government rallies rocked the island, the largest such demonstrations since Castro’s 1959 revolution.

Internet communications in Havana appeared to collapse again for the second night on Friday as protests flared, making mobile calls and messaging impossible until around 4 a.m. on Saturday.

“Internet has been cut again in Cuba, at around the same time as yesterday,” said Alp Toker, director of internet watchdog NetBlocks. “The timings provide another indication that the shutdowns are implemented as a measure to suppress coverage of the protests.”

The Cuban government did not respond to a request for comment on the situation.

As the protesters marched in Playa, the electricity suddenly came back on in some housing and apartment blocks.

“When people protest, yes, they put on the lights,” said one local resident, Andres Mora, pointing to a recently lit building. “But our children’s food has already rotted and they don’t have anything to eat.”

The prolonged blackouts in Cuba are particularly upsetting for many residents because obtaining basic goods – including food, fuel and medicine – often means hours waiting in line under the hot Caribbean sun.

Outside Havana, vast swaths of the island were still in the dark as work crews continued to repair electric poles and lines and remove trees from roads.

The Wall Street Journal reported late on Friday that Cuba’s government has made a rare request for emergency assistance following the hurricane from the administration of U.S. President Joe Biden.