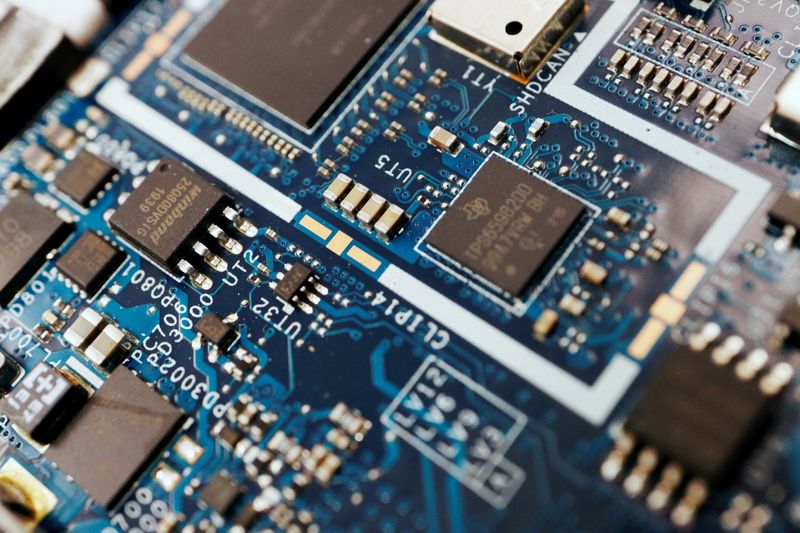 © Reuters. FILE PHOTO: Semiconductor chips are seen on a circuit board of a computer in this illustration picture taken February 25, 2022. REUTERS/Florence Lo/Illustration

TAIPEI (Reuters) – Taiwan will use the new U.S.-led “Chip 4” group to safeguard the interests of Taiwanese companies and to ensure supply chain resilience, a deputy minister said on Wednesday, though he added that the group had no agenda yet.

A preliminary meeting of the group took place last week with representatives from Taiwan, the United States, South Korea and Japan attending.

A global semiconductor shortage has thrust chip powerhouse Taiwan into the spotlight and made supply chain management a bigger priority for governments around the world.

“We will use that platform to strive to safeguard our companies’ interest,” he said, but added that the group not started formal meetings.

Taiwan President Tsai Ing-wen has said that the island is committed to ensuring its partners have reliable supplies of semiconductors and has urged allies to boost collaboration amid intensified threats from China.

The establishment of the group also comes on the heels of a new U.S. law passed in August that includes $52 billion in subsidies for companies that make chips or conduct chip research in the United States, as Washington looks to lessen U.S. reliance on Asia for semiconductors.

Asked about the United States wanting to reduce its reliance on manufacturing in Taiwan, Chen said Taiwan’s chip industry has a well integrated supply chain and a very good workforce.

“From the government’s perspective we think Taiwan’s advantage and Taiwan’s edge in developing the most advanced manufacturing technology will always be here in Taiwan.”

But the government is happy to see Taiwanese chip firms investing in like-minded countries, he added.

“We think that will only deepen and strengthen our relations.”