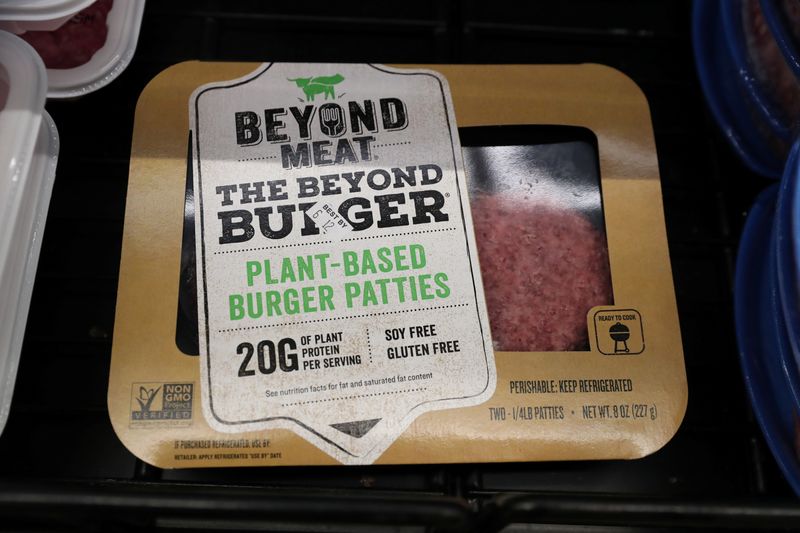 © Reuters. FILE PHOTO – A Beyond Meat Burger is seen on display at a store in Port Washington, New York, U.S., June 3, 2019. REUTERS/Shannon Stapleton

(Reuters) -Beyond Meat on Friday cut its annual revenue forecast for the second time due to slowing demand for faux meat as consumers look for cheaper options to beat rising prices and announced jobs cuts as well as executive departures.

The plant-based meat producer plans to cut 200 jobs this year and said its finance chief Philip Hardin, who has been in the role for just over a year, will leave at the end of the month. It named board director Lubi Kutua as his replacement.

Beyond Meat (NASDAQ:) said its operation head Doug Ramsey has left the company, weeks he was suspended on reports of his arrest for allegedly biting a man’s nose during an altercation.

Shares fell 3.6% as the company also signaled rising competition as traditional names like Tyson Foods Inc (NYSE:) and Kellogg (NYSE:) Co as well as newbies jostle for a share of the plant-based meat space by offering big discounts.

While global packaged food makers have raised prices to offset higher costs tied to labor, ingredients and transportation, analysts say Beyond Meat does not have the room for that as it is still trying to win customers to its products.

“We are significantly reducing expenses and sharpening our focus on a set of key growth priorities,” Chief Executive Officer Ethan Brown said.

The layoffs is expected to save about $39 million over the next 12 months and would also see the elimination of the North America president post among other changes. However, it would take a one-time cash charge of about $4 million in the fourth quarter.

The company, which had earlier cut its full-year forecast in August, said it now expects annual revenue to be in the range of about $400 million to $425 million, compared with previous expectations of between $470 million to $520 million.