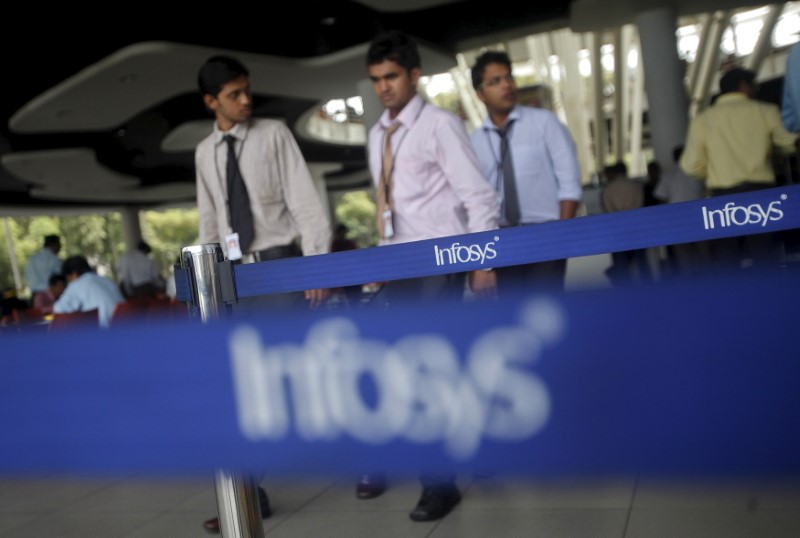 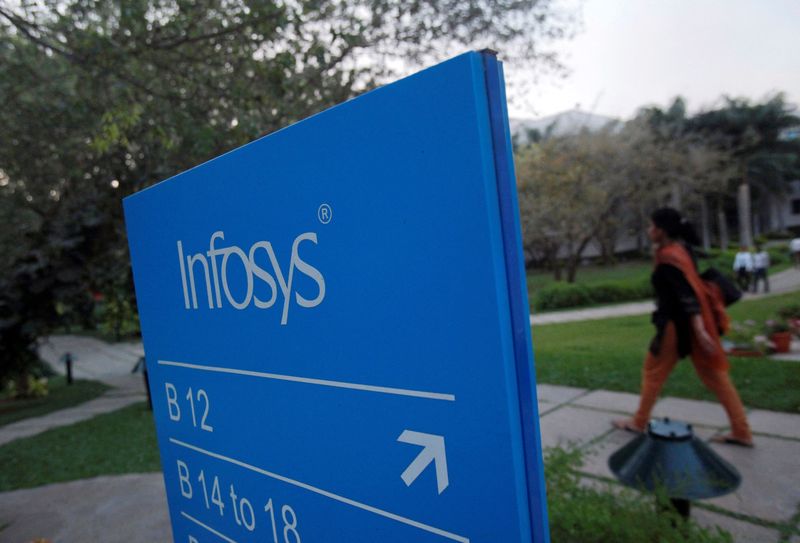 © Reuters. FILE PHOTO: An employees walks past a signage board in the Infosys campus at the Electronics City IT district in Bangalore, February 28, 2012. REUTERS/Vivek Prakash/File Photo

By Nivedita Bhattacharjee and Nandan Mandayam

BENGALURU (Reuters) -Shares of India’s Infosys (NYSE:) Ltd jumped to a one-month high on Friday, after it announced a $1.13 billion share buyback plan and raised its revenue growth outlook.

Bengaluru-based Infosys said on Thursday it now expects revenue to grow 15%-16% this fiscal year ending March, as against a 14%-16% increase earlier.

Shares of Infosys rose as much as 5.2% to an intraday high of 1,493.70 rupees on the National Stock Exchange, their highest since Sept. 14.

Infosys’ bullish view is in contrast to the outlook of larger rival Tata Consultancy Services Ltd, which earlier this week pointed to some weakness in long-term outsourcing deals materialising, while it mostly added small- and medium-sized orders.

Analysts now expect Infosys to see a 19% rise in annual revenue, compared with a 16% increase at TCS, according to Refinitiv data.

“We expect Infosys’ growth outperformance over TCS to continue in FY23-24F (fiscal year 2023-2024),” Nomura said in a research note, keeping Infoys as its top pick in the large cap IT services segment.

Analysts at Jefferies retained their “buy” rating for the stock, and raised the target price to 1,710 rupees from 1,700 rupees, saying the buyback would support its stock price.

However, the country’s no.2 IT services firm trimmed its operating margin outlook for the year to 21%-22% from 21%-23%, in line with rivals, due to the challenging macroeconomic environment and fears of an economic slowdown in their major markets of the U.S. and Europe.

Most Indian software exporters are keeping a tight watch on their costs in the face of tightening budgets at their recession-wary U.S. and European clients.