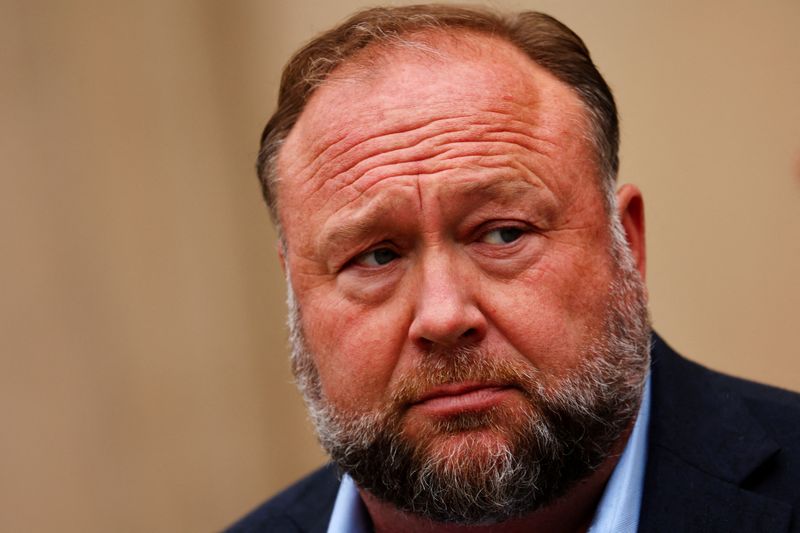 (Reuters) – Right-wing conspiracy theorist Alex Jones has vowed to fight a nearly $1 billion defamation verdict against him, but experts say neither bankruptcy nor an appeal of a Connecticut jury’s findings on Wednesday are likely to salvage his personal fortune and media empire.

A jury in Waterbury, Connecticut, state court found Jones and the parent company of his Infowars website must pay $965 million to numerous families of the 20 children and six staff members slain at Sandy Hook Elementary School in Newtown, Connecticut, in 2012 for claiming they were actors who faked the tragedy as part of a government plot.

The verdict could grow substantially when a judge decides how much to award in punitive damages next month. It also comes three months after a Texas jury awarded two Sandy Hook parents $49.3 million in a similar case.

Jones has said he will fight the verdict on appeal and use the recent bankruptcy of his company, Free Speech Systems LLC, to avoid paying. It is unclear if he and his companies could ever pay the verdicts in full, but attorneys for the plaintiffs have vowed to prevent him from shielding any of his assets.

“We’re confident we will recover as much of the verdict as we can in the near-term, and in the long-term, this verdict isn’t going anywhere,” Chris Mattei, an attorney for the plaintiffs, said.

Infowars’ finances are not public, but according to trial testimony the site brought in revenue of at least $165 million between 2016 and 2018. An economist in the Texas case estimated that Jones is personally worth between $135 million and $270 million.

Free Speech Systems filed for bankruptcy in July. The Sandy Hook families have intervened in the case and accused Jones of withdrawing up to $62 million from Free Speech Systems while burdening it with $54 million in “concocted” debt owed to a different company owned by Jones and his parents.

Bankruptcy courts have wide discretion to decide which creditors get paid first and are vigilant in cases where companies try to siphon out funds via debt held by shell entities, UConn School of Law professor Minor Myers said.

“No bankruptcy judge would allow Alex Jones and his dad to stand in line in front of the plaintiffs,” Myers said.

Plaintiffs with judgments against bankrupt entities typically recover only a portion of what they are owed, along with other creditors whose debts are ranked in priority by the court.

For judgments involving intentional infliction of harm, however, courts will often rule that plaintiffs can continue seeking payment after the bankruptcy is concluded by going after wages and other assets, experts say.

Jones’ “underlying conduct was egregious, and that’s the kind of thing that could get you beyond the limits of a bankruptcy,” Brian Kabateck, an attorney who was not involved in the case, told Reuters.

In the near-term, Jones is unlikely to prevail if he asks a judge or appeals court to reduce the verdict on the grounds that it is excessive, according to several Connecticut attorneys.

Unlike some states, Connecticut does not cap compensatory damages, and judges there rarely question jury verdicts because the legal standard for doing so is high, attorney Mike D’Amico said.

While the verdict is eye-popping, it includes more than a dozen plaintiffs who say they suffered years of harassment, death threats and stalking at the hands of Jones’ followers.

D’Amico said a billion-dollar verdict is appropriate given the uniquely tragic circumstances of the case and egregious nature of Jones’ conduct.

“This was a tragedy unspeakable in terms of its impact and involves conduct that is just so abhorrent,” D’Amico said. “This is the kind of award you would expect.”

Jones may have also hurt his chances by repeatedly violating court orders, claiming the trial was a sham and erupting into a tirade against “liberals” during his testimony. Syracuse University College of Law professor Roy Gutterman said that Jones’ “contempt for the system” will likely undermine any appeal.

“It’s going to be a big ask for the defendant to come back to the court and say, ‘Will you now please reduce this to something a little more reasonable?” Gutterman said.