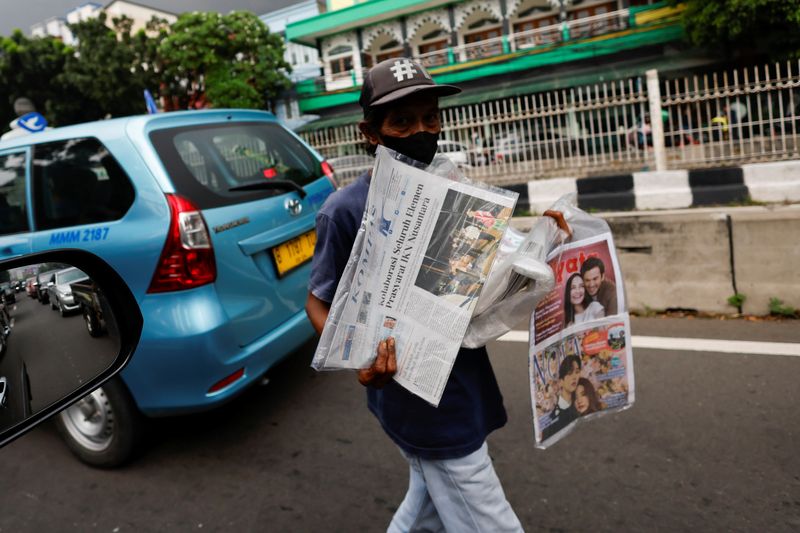 © Reuters. FILE PHOTO: A street vendor sells papers with the news of Indonesian New Capital Nusantara (IKN) on its headline, during a traffic in Jakarta, March 15, 2022. REUTERS/Willy Kurniawan/File Photo

By Stanley Widianto and Stefanno Sulaiman

JAKARTA (Reuters) – Indonesia will offer generous incentives, including a 30-year tax break, for companies investing in a $32 billion project to build a new capital city in the country called Nusantara, an official said late on Tuesday.

Bambang Susantono, head of the Nusantara National Capital Authority, made the comments at a gathering with hundreds of local and foreign investors in the current capital Jakarta.

Construction of a dam and roads has started at the site of the new capital, he said, currently an underdeveloped area fringed by Borneo’s vast rainforest.

As many as 100,000 construction workers will accelerate work next year in an effort to get the site ready by Aug. 17, 2024, when President Joko Widodo wanted to celebrate Indonesia’s independence day at a new presidential palace, Susantono said.

Susantono asked the gathering to consider investing in areas such as healthcare, education and entertainment in the new capital, promising that regulations on fiscal incentives would be released soon.

The incentives include an a tax holiday of up to 30 years and a 350% “super-tax deduction” for research and development, more generous tax concessions than for investments in other Indonesian cities, he said

“This is a lifetime opportunity…to build this city,” he said, adding the government will form a business entity to speed up deal making with the private sector.

At the gathering, which was also attended by the president, an executive with Indonesian hospital operator PT Medikaloka Hermina pledged to invest in Nusantara.

In his speech, the president, better known as Jokowi, sought to ease concerns about the future of Nusantara after his second term ends in 2024.

Jokowi is constitutionally barred from seeking a third term and there have been questions about whether his successor will back the project, which some have criticised as profligate spending during difficult economic times.

“Everything has been approved by 93% of parties in parliament. If any one of you is still unsure, what else is missing? There’s no need to question anymore,” Jokowi told investors.

A June survey of 170 experts by the Indonesian Centre for Strategic and International Studies found nearly 59% were unsure the Nusantara project would materialise, citing uncertainty over funding and management.