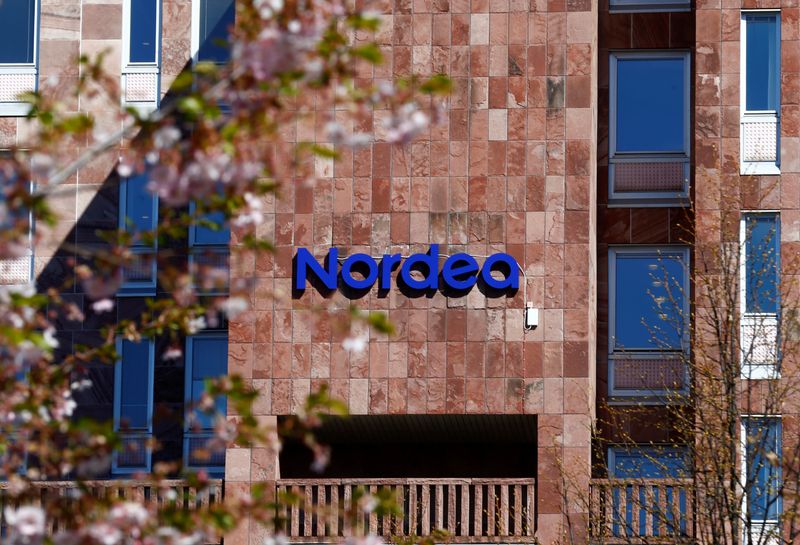 © Reuters. FILE PHOTO: The Nordea bank logo is seen at the bank’s headquarters in Stockholm, Sweden, May 7, 2017. REUTERS/Ints Kalnins

STOCKHOLM (Reuters) – Finnish banking group Nordea posted third-quarter operating earnings just above market expectations on Thursday on the back of rising interest income and said its outlook for the full year had improved.

The Nordic region’s biggest bank reported an operating profit of 1.30 billion euros ($1.27 billion) in the quarter, up from 1.27 billion a year ago, beating the mean forecast of 1.26 billion in a Refinitiv poll of analysts.

Rampant inflation and rapidly tightening monetary policy is lifting interest income for Nordic banks while the mounting costs for households and businesses, and slumping real estate markets, have yet to translate into a meaningful rise in loan losses from marginal levels.

Interest income at Nordea, which has sizable operations in all the four biggest Nordic countries, rose 15% year-on-year to 1.41 billion euros in the July-September quarter to come in above the 1.35 billion seen by analysts.

Earlier this week, Swedish rival Handelsbanken reported record earnings on the back of a surge in interest income while reassuring about credit quality ahead.

The Nordea group, created through the merger of several Nordic banks just over two decades ago, raised its full-year outlook somewhat, forecasting a cost-to-income ratio of 48–49% versus the previous 49–50%.

It kept unchanged guidance for a return on equity above 11% in 2022.