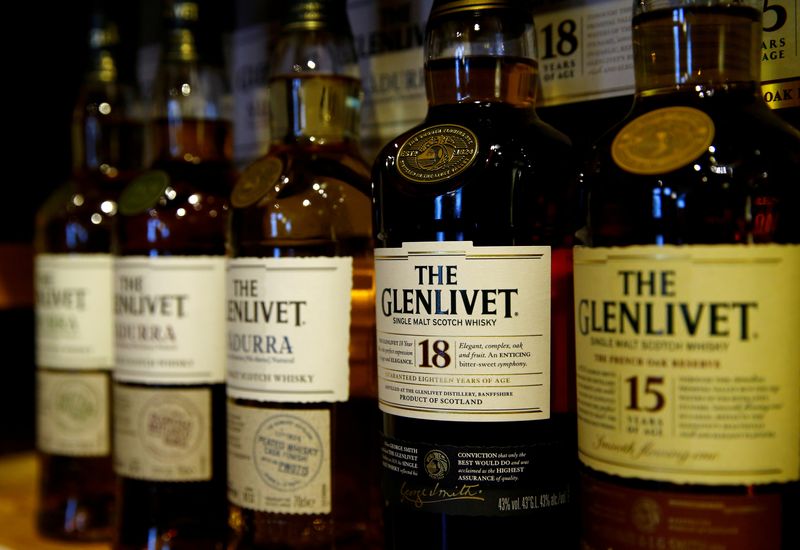 © Reuters. FILE PHOTO: Bottles of single malt scotch whisky The Glenlivet are pictured in a shop near Lausanne, Switzerland May 18, 2017. REUTERS/Denis Balibouse/File Photo

PARIS (Reuters) – French spirits maker Pernod Ricard (EPA:) said on Thursday it was confident sales growth would remain dynamic through its 2023 fiscal year after it delivered a forecast-beating 11% sales growth in the first quarter helped by price increases in the United States, its top market.

Pernod, the world’s second-biggest spirits group behind Diageo (LON:), said the strong start to the year also reflected strong demand in China and in India and a continued rebound in global travel retail.

“I am hugely encouraged by our start to the year,” Chairman and CEO Alexandre Ricard said in a statement.

In an environment that remained volatile with high inflation, the war in Ukraine, and COVID-19 lockdowns in some Chinese cities, the group said it expected sales growth for the full year would remain “dynamic and broad-based, albeit moderating on a normalizing comparison basis,”

For the first quarter ended Sept. 30, Pernod – which owns Martell cognac, Mumm champagne and Absolut vodka – reported sales of 3.308 billion euros ($3.23 billion), a like-for-like rise of 11%, which came above market expectations for a 9.3% sales rise.

In China alone, sales rose 9% in the first quarter thanks strong mid-Autumn festival sales. The Martell cognac brand recorded double-digit sales growth during the quarter in China despite COVID restrictions.

Sales in global travel retail rose 24% in the first quarter as it continued its recovery outside of China and was on track to deliver profit back to pre-COVID levels, the group said.