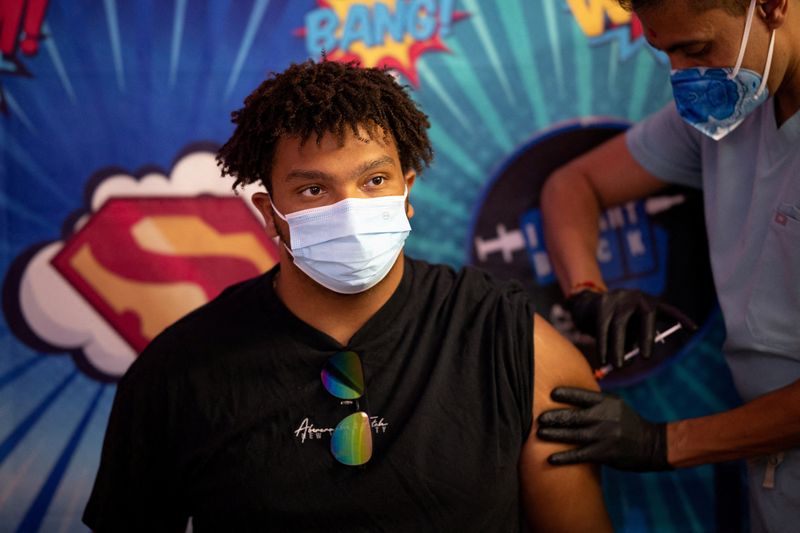 NEW YORK (Reuters) – With most Americans delaying or skipping new COVID-19 booster shots, analysts and investors are now predicting far fewer will be given each year, pushing the number of shots well below annual flu vaccinations.

With fewer shots needed, vaccine makers including Pfizer Inc (NYSE:), partner BioNTech SE (NASDAQ:), rival Moderna (NASDAQ:) Inc and Novavax (NASDAQ:) Inc could have to hike prices as much as three times current levels if they hope to meet Wall Street revenue forecasts for the shots for 2023 and beyond, several analysts said. Last year, many on Wall Street were estimating the number of COVID-19 shots would be in line with the annual flu vaccine, which is the vaccine market leader with more than 160 million shots per year in the United States and 600 million shots globally.

Now the slowing pace of the early COVID revaccination campaigns – particularly in the key U.S. market – is changing that view. A recent poll by Kaiser Family Foundation found that two-thirds of American adults do not plan on getting a COVID vaccine soon. Analysts are expecting the U.S. market to be as low as one-third the size of the flu.

“The fact that you have people saying the pandemic is over doesn’t motivate people to get vaccinated,” said Dr. Bruce Farber, chief of public health and epidemiology for New York hospital system Northwell Health.

He added that instances of COVID infections in those who have been vaccinated has left many to question the effectiveness of the vaccine.

Healthcare investor Bijan Salehizadeh with Navimed Capital, previously thought demand would likely mirror that of the flu, but now believes it will be much smaller without significant evidence that updated shots are better.

“The average person is not going to jump to get it” without signs of improved efficacy, he said.

Over the first six weeks of the roll out, around 14.8 million people have received the updated COVID-19 booster shots which target the original coronavirus strain and the Omicron strain. In the first six weeks of the 2021 vaccination campaign, over 22 million people received their third shot even though only older and immunocompromised people were eligible at that point. Uptake of the boosters this year in the European Union did not spike as hoped after new, updated shots that target Omicron were released, staying in a range of 1 million to 1.4 million doses a week.

Wall Street analysts and investors agreed vaccine sales could improve if the companies provide proof new boosters protect people from mild illness; if they develop pan-coronavirus vaccines; or if the shots are combined as a single shot with the flu vaccine. A new wave of infections could also spur demand.

For 2023, analysts on average estimate Pfizer, Moderna and Novavax could generate sales of $16.3 billion, $7.9 billion and $2.8 billion from their COVID-19 vaccines, respectively, according to Refinitiv data.

Pfizer, BioNTech and Moderna declined to discuss their outlook for COVID related sales.

Novavax Chief Commercial Officer John Trizzino said that although vaccine fatigue and the belief the pandemic is over are currently tamping down demand, the drugmaker expects the COVID market will eventually be at least as big as flu. He said increased infection rates, hospitalizations and deaths will drive people to get boosters.

“Unfortunately, the virus does that work for us,” Trizzino said. Moderna has also suggested several times that it believes flu is a good comparison both in the United States and globally. The companies could make up for some of the weaker demand with price increases. Moderna has said that it could aim to charge as much as $100 a dose for shots that it originally priced at around $16.50. SVB Leerink analyst Daina Graybosch is skeptical the companies will be able to raise prices that high.

But Jefferies’ Michael Yee said it is plausible private health insurers and U.S. government health plans would spend up to three times more than the current price of around $30 to prevent the significant costs of hospitalizations or long COVID. That would mean annual revenue of $3 billion to $5 billion over the long-term for a company like Moderna, he added. Investors have already started to sour on the promise of the COVID vaccine market, particularly for Moderna, BioNTech and Novavax, three young companies that rely on the shots to generate virtually all of their profits. Shares in all three companies have fallen by at least two-thirds over the last year. Pfizer, one of the biggest pharmaceutical companies in the world, has dropped around a third.