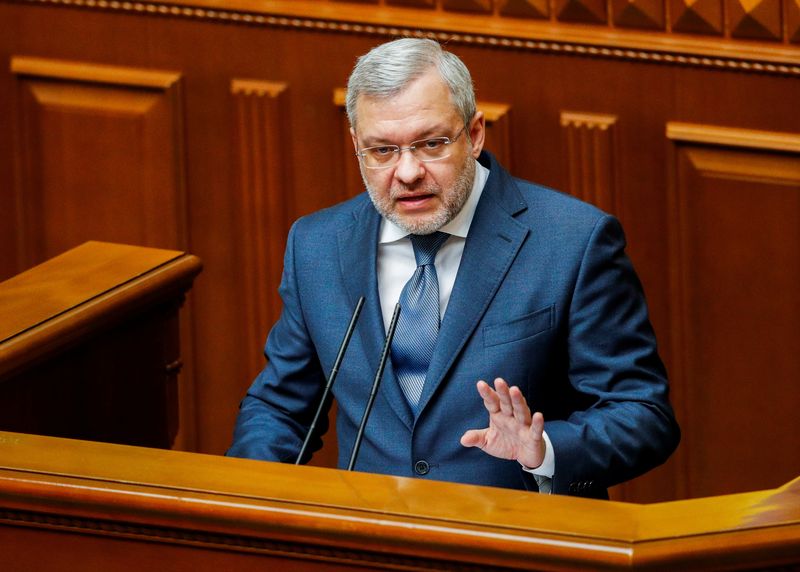 KYIV (Reuters) -Russian air attacks have hit at least half of Ukraine’s thermal generation capacity, causing billions of dollars of damage since Oct. 10, though not all those power units have stopped working completely, Ukraine’s energy minister said on Friday.

German Galushchenko told Reuters in an interview that Ukraine may need electricity imports to get through the winter after attacks that had struck 30-40% of power infrastructure and traders were already holding negotiations with suppliers.

Moscow stepped up its strikes last week using missiles and loitering munitions to target Kyiv and major power and heating infrastructure in what Kremlin leader Vladimir Putin said was payback for a Ukrainian attack on a bridge to annexed Crimea.

“It’s quite a lot of capacity. I can tell you that it’s… at least half of thermal (power) generation capacity, even more,” Galushchenko said, when asked about the scale of the damage.

The minister said he believed that Russia, whose invasion of Ukraine is nearing the eight-month mark, now planned to destroy the entire energy system, though he emphasised that for now it was still functioning stably.

“This week, they targeted a number of thermal generation (plants),” Galushchenko said. Ukraine had lost 4000MW in generating capacity as a result of the strikes, he said.

Earlier this week towns and cities restricted power supplies and limited electricity use this week so energy companies could repair power facilities hit by a wave of Russian air strikes.

“We see that they targeted a number of new (facilities), but also they shelled (facilities) which had been already shelled before to destroy them absolutely,” he said.

Galushchenko warned that rebuilding the damaged infrastructure would take “months”, and that Ukraine would pursue Russia for the costs through international courts.

Five energy workers have been killed and 11 wounded in attacks since Oct. 10, his ministry says.

Galushchenko spoke in English throughout the interview, dressed in casual military style clothing in the airy, Soviet-era offices of the energy ministry in Kyiv.

He has served as energy minister since April 2021 and earlier was vice president at Energoatom, the state nuclear company that has surged to prominence during the war as fears have mounted around the Russian-occupied nuclear plant in Zaporizhzhia.

He said he saw no signs of progress towards a deal involving Russia, Ukraine and the United Nations nuclear watchdog on resolving the situation at the plant, Europe’s biggest nuclear power station.

Russian forces have occupied the plant in southern Ukraine since shortly after Moscow’s invasion but it is still operated by its Ukrainian staff. Kyiv and Moscow have accused each other of shelling the facility and risking a nuclear disaster.

Rafael Grossi, the head of the International Atomic Energy Agency, has held talks in Moscow and Kyiv in an effort to secure agreement on a safety and security protection zone around the plant.

Asked if he saw progress towards an agreement, Galushchenko said: “Not at this stage.”

“I see that there were some messages from Rafael this week, that he again wants to discuss the framework of an agreement. I don’t know, maybe something changed in the Russian position, but I do not believe (in) any possibility to agree with Russia,” he said.

Asked at what point it would be too dangerous for Ukrainian staff to continue working at the plant, he said: “This point is a nuclear accident,” explaining that they had a responsibility to carry on as they could not be replaced by Russia.

An evacuation of the plant’s “thousands” of workers would therefore only happen “several hours before (a) real catastrophe,” Galushchenko said.