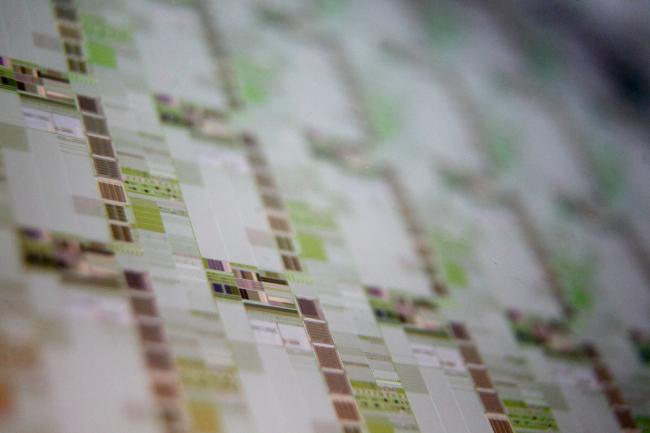 &copy Bloomberg. A 12-inch wafer is displayed at the headquarters of Semiconductor Manufacturing International Corp in Shanghai. Photographer: Qilai Shen/Bloomberg

(Bloomberg) — China’s top technology overseer convened a series of emergency meetings over the past week with leading semiconductor companies, seeking to assess the damage from the Biden administration’s sweeping chip restrictions and pledging support for the critical sector.

MIIT officials appeared uncertain about the way forward and at times appeared to have as many questions as answers for the chipmakers, people familiar with the discussions said. While they refrained from hinting about counter-measures, officials stressed the domestic IT market would provide sufficient demand for affected companies to keep operating, the people said, asking to remain anonymous on a sensitive issue.

Many of the participants argued US curbs collectively spell doom for their industry, as well as China’s ambitions to un-tether its economy from American technology. Yangtze Memory, among China’s best hopes of getting into cutting-edge chipmaking, warned the MIIT its future may be in jeopardy, according to one of the people.

AI chipmaker Biren is a telling example of how Chinese semiconductor startups went from stardom to crisis in a matter of days. The chip designer was eyeing a $2.7 billion valuation and declared in August it had released the first general-purpose graphics processing unit, “setting a new record in global computing power.”

But Biren had contracted with Taiwan Semiconductor Manufacturing Co. to produce its chips, using advanced 7-nanometer technology. Now TSMC may have to stop working with the startup under Biden’s regulations, and no company in China has the capabilities to replace it.

Biren declined to comment on the discussions but said in a statement the company was operating normally, and it determined the curbs would have no impact on their business after checking with lawyers. The ministry didn’t respond to a faxed request for comment. Dawning Information representatives didn’t respond to requests for comment. Yangtze Memory said in a statement that reports about its executives attending a meeting with the MIIT were inaccurate.

US firms have withdrawn employees from promising firms including top memory maker Yangtze, while non-American suppliers such as ASML Holding (NASDAQ:) NV have halted support for local customers. Dawning Information, China’s leading builder of supercomputers, and its unit Hygon are scrambling to find alternatives to the American silicon they need to keep going.

Hygon spokespeople didn’t immediately reply to emails seeking comment. But the company said in a filing last week it was evaluating the longer-term impact of the sanctions.

“Biden’s new chip export controls are a huge blow to the CCP’s science and technology ambitions,” Jordan Schneider, an analyst at Rhodium Group, wrote on Twitter, referring to the Communist Party.

It’s unclear how Beijing will react to the new restrictions, the Biden administration’s most aggressive yet as it tries to stop China from developing capabilities it sees as threatening.

Xi Jinping, in a landmark address over the weekend, pledged tech self-reliance to prevail in a battle with the US for technological supremacy — which many took as a sign Beijing will redouble policy and financial support for sectors such as AI and chips. China’s leader however stopped short of directly addressing Washington’s latest moves or outlining new aid. Officials haven’t indicated whether they were considering measures to retaliate.

Earlier this month, the US Commerce Department unveiled sweeping regulations that limit the sale of semiconductors and chip-making equipment to Chinese customers, striking at the foundation of the country’s efforts to build its own chip industry. The US also added 31 organizations to its unverified list, including Yangtze Memory and Naura, severely limiting their ability to buy hardware from abroad.

“We find the newly-announced restrictions well thought-out and plugs many loopholes that the prior restrictions failed to cover,” Bernstein analysts led by Mark Li wrote last week. “China won’t be able to advance in semiconductor technologies as fast as before and probably has no choice but to focus on the mature part.”

The global chip industry, which relies on China as the world’s biggest single consumer of semiconductors, has been bracing for retaliation of some fashion from Beijing. US firm Lam Research Corp (NASDAQ:). warned its revenue could halve in China — a market that yields roughly 30% of its overall business. ASML however suggested “fairly limited” impact from the export controls.

But depending on how broadly Washington enforces the restrictions, the impact could extend well beyond semiconductors and into industries that rely on high-end computing, such as electric vehicles, aerospace and smartphones. Chip sector leaders from Intel Corp (NASDAQ:). to TSMC have sold off in recent days, spooked by the growing uncertainty at a time the world is bracing for a potential recession.

“When Beijing is caught flat-footed, its initial reaction is always slow,” according to a note from Fathom China. “Ministers are not authorized to make decisions on their own, they need the big bosses to decide. And right now, the big bosses are busy with the Party Congress.”