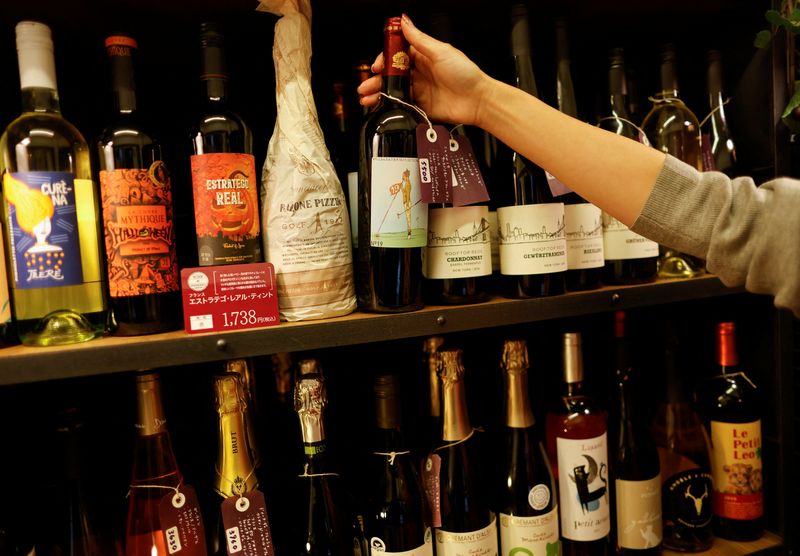 © Reuters. Imported wines from different countries, including the U.S., are displayed at the wine shop ‘Wine and Weekend’ in Tokyo, Japan October 21, 2022. REUTERS/Issei Kato

By Tom Bateman and Rocky Swift

TOKYO (Reuters) – The weak yen forced Suzy Iwamoto to raise prices on imported wines at her bar and bottleshop in Tokyo by about 10% last month, and she fears more hikes may be inevitable after the yen plumbed levels this week that were last seen 32 years ago.

On Friday, a day after the yen slid past 150 per dollar, the government reported that core consumer inflation hit an eight-year high of 3.0% in September.

Prices on some 20,000 food and drink items in Japan have gone up this year, according to researcher Teikoku Databank, particularly prices for imported items.

“It’s not just the dollar. We also offer a lot of European wines, so overall I really have to think about the pricing in store,” said Iwamoto, the owner of the Wine & Weekend shop in the Nihonbashi area of central Tokyo.

“Unfortunately I have to pass some of the burden on to my customers, which as a shop owner is really painful.”

Japan imports about 70% of the wine consumed in the country, most of it coming from France, Chile, Italy, and the United States, according to the U.S. Department of Agriculture.

Wine producers in the U.S. are raising base prices, but then the yen’s decline has resulted in a double whammy for consumers in Japan, said Andrew Dunbar, the president of Iconic Wine Japan, which handles imports of about 30 brands.

The company raised prices by 10% across the board in September and will likely have to warn distributors of another hike within a few months, Dunbar added.

In particular, Japan is the biggest market for France’s Beaujolais Nouveau, with this year’s first shipments of the fruity wine arriving this week.

Major drinks companies Kirin Holdings Co and Suntory Holdings raised prices on their Beaujolais bottles by 40% or more this year, and reduced the variety of offerings.

“The cost of importing wines in Japan has never been as high as today,” said Eric Jean-Pierre Simon Dahler, the owner of Wine Prosperite, which deals mostly in imports from France. “Restaurants in Tokyo are not ordering wines, and private customers are very cautious about spending money.”

Even before the yen’s precipitous decline from August, consumer prices were surging in Japan after decades of deflation, due to logistics logjams from the COVID-19 crisis and soaring energy costs caused by the war in Ukraine.

“It’s not just wine, in general everything’s going up, especially my favourite imported items,” said Maiko Kissaka, a 49-year-old manager at a foreign investment company. “It’s tough but I keep buying them. I’ll cut back on other things, I don’t want to cut back on booze.”