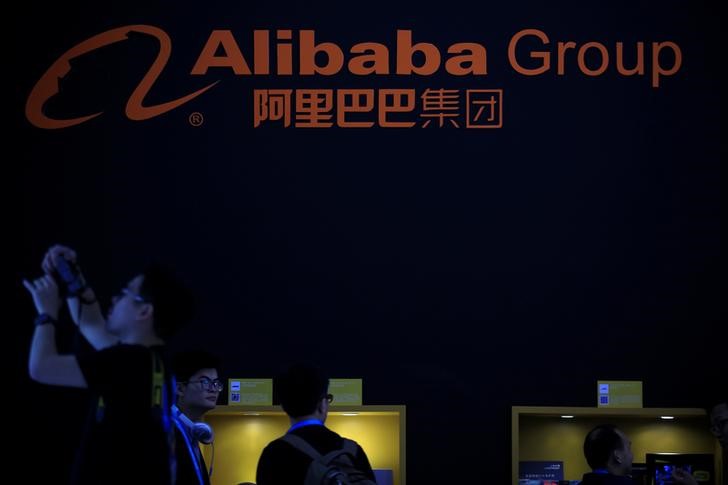 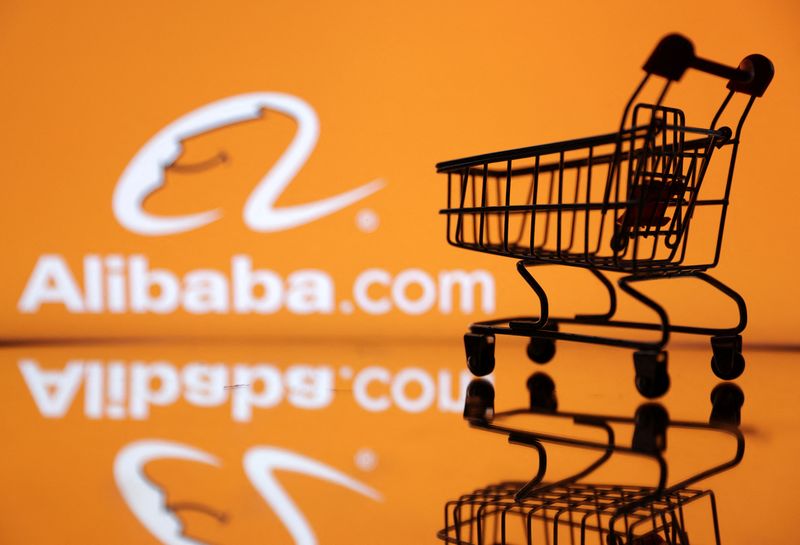 © Reuters. Shopping trolley is seen in front of Alibaba logo in this illustration, July 24, 2022. REUTERS/Dado Ruvic/Illustration

By Casey Hall and Sophie Yu

SHANGHAI (Reuters) – When Alibaba (NYSE:) kicks off its Singles Day extravaganza on Monday, it will for the first time in years not be headlined by its two mega sales stars, casting a pall over China’s biggest shopping event and leaving brands guessing how well they will do.

The event, which the e-commerce giant has built up from a one day Nov. 11 sale to a nearly two-week festival, will begin with seven days of pre-sales to allow shoppers on its Taobao and Tmall marketplaces to place deposits to secure goods later at a discounted price.

Last year, they pre-sold a combined 18.9 billion yuan ($2.61 billion) worth of products on opening day, accounting for about 3.5% of the entire event’s takings of 540.3 billion yuan.

But there will be no Viya this year. She has remained offline since being fined for tax evasion in December. Li, also known as Austin, has been absent from Alibaba’s Singles Day marketing, after he disappeared for three months with netizens speculating that one of his livestreams had offended Chinese censors. Alibaba declined to comment on his participation in this year’s event.

Li returned to screens last month but remains lower key than before his disappearance. People close to Li told Reuters cosmetics products will make up only 30% of his line up this Singles’ Day, compared with 40% last year, with more necessities and Chinese brands to be featured.

While there are thousands of people in China that still hawk products on Taobao Live, the two had accounted for the lion’s share of traffic, industry executives said.

“Before you could get away with just using Austin, which was sort of beautiful – it was expensive but you’re going to sell out fast and get the massive amplification,” said Josh Gardner, chief executive of China market e-commerce partner Kung Fu Data, which manages online stores for over a dozen global brands, including jeans-maker G-Star Raw.

“We don’t have anyone in the market who can move that much that quickly anymore.”

Most brands, he said, are experimenting with a “portfolio approach” tapping different anchors – but not expecting the same results.

Sweaty Betty China Vice President Lexie Morris told Reuters the active-wear brand would use only “one or two” livestream hosts this Singles Day season and that it was starting to work with much smaller and more sports-focused livestreamers.

She said, however, livestreaming would be less important as a sales driver in future and that working with superhosts also had down sides.

“Offering discounted products through Li Jiaqi brings a volume of customers in, but they won’t necessarily be your typical customer profile. This muddies store data and can confuse Tmall platform traffic algorithms.”

Analysts expect to see another year of slowing sales overall this Singles Day, dampened by a slowing economy and China’s zero-COVID-19 policy. Last year, Alibaba, which has toned down the event’s marketing hype amid regulatory scrutiny, recorded 8.5% sales growth, its slowest ever.

In place of Li and Viya this year for Singles Day, Alibaba is promoting appearances by tech entrepreneur Luo Yonghao and Yu Minhong, founder of New Oriental Education & Technology Group Inc, who have pivoted to host popular livestreaming sales shows on ByteDance’s Douyin, the Chinese equivalent of TikTok.

Lu Zhenwang, an independent e-commerce expert and founder of a Shanghai-based firm that manages influencers, said the sudden change in circumstances regarding Li and Viya had made Taobao Live and superhosts less attractive to brands from a purely traffic perspective.

More are now going to Douyin where there many niche livestreamers with their own followers.

“The daily traffic of Taobao Live has reached its peak,” he said.

In a statement to Reuters, Alibaba dismissed concern about traffic. “Instead of a traffic-driven model, Taobao Live helps merchants grow their businesses sustainably,” it said.