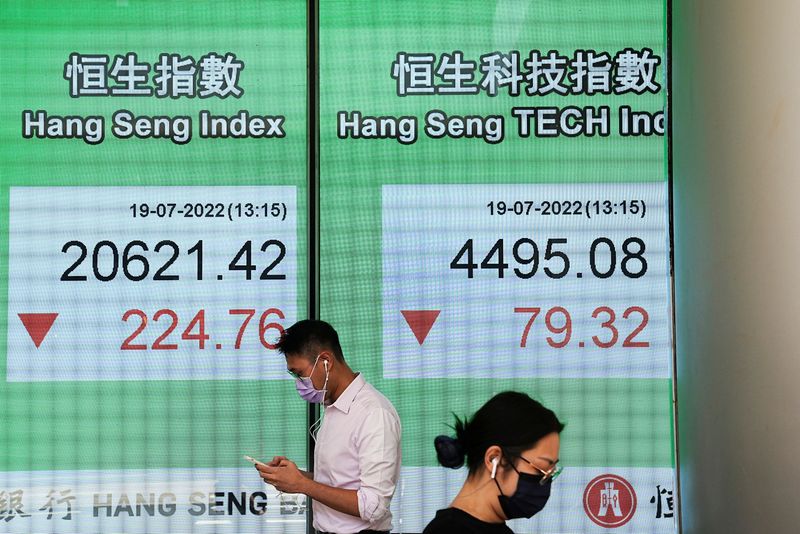 By Xie Yu and Summer Zhen

The slumped 6.4%, recording its worst day since the depth of the global financial crisis in late 2008. Record foreign outflows via a trading link between the mainland and Hong Kong knocked China’s benchmark CSI300 Index down 3%.

Both the property and tech sectors have been targeted for far greater regulation under President Xi, who secured a third term at a Communist Party Congress on Sunday.

International investors are “getting into the capitulation phase” where they “just don’t want to have the exposure”, said Andrew McCaffery, Fidelity International’s global chief investment officer, asset management.

The catalyst for the worry was the Communist Party Congress and the perception that there was not enough economic focus, he said.

“The message here is clear: COVID Zero lockdowns, shared prosperity agenda and sectorial crackdowns are not going anywhere,” he said, adding that he believed these risks would limit China’s annual economic growth to 2-3%.

China’s gross domestic product (GDP) rose 3.9% in the July-September quarter year-on-year, official data showed on Monday, rebounding at a faster-than-expected pace but that was not enough to cheer investors.

Stocks declines were relatively moderate for mainland markets, which are less vulnerable to foreign selling and were bolstered by a surge in Chinese defence-related stocks as investors bet geopolitical tensions, particularly over Taiwan, would intensify.

Foreign investors sold a net 17.9 billion yuan ($2.47 billion) of Chinese onshore shares via Stock Connect on Monday, the biggest outflow since the scheme was launched in 2014.

Onshore yuan fell to its weakest level in nearly 15 years. , in which trade began from 2011, slipped below 7.30 per dollar in late afternoon trading to a record low.

Ravaged by the zero-COVID policy, which seeks to stamp out all outbreaks and has resulted in frequent lockdowns, sectors such as tourism, leisure as well as hotel and catering saw steep declines.

An amendment to the Communist Party’s constitution enshrined “developing fighting spirit, strengthening fighting ability”, while a call to oppose and deter forces seeking independence for Taiwan was included for the first time.

With investors dumping internet companies and property developers, some of those funds were re-directed into chipmakers, high-end equipment producers and defence stocks.

Fidelity’s McCaffery said the panic selling could be overdone.

“You’ve got to divorce current fear factors of the international investors … with the reality that’s occuring in the Chinese economy,” he said, noting that China’s efforts to promote strategic industries, increase infrastructure spending, and tackle climate changes created investment opportunities.