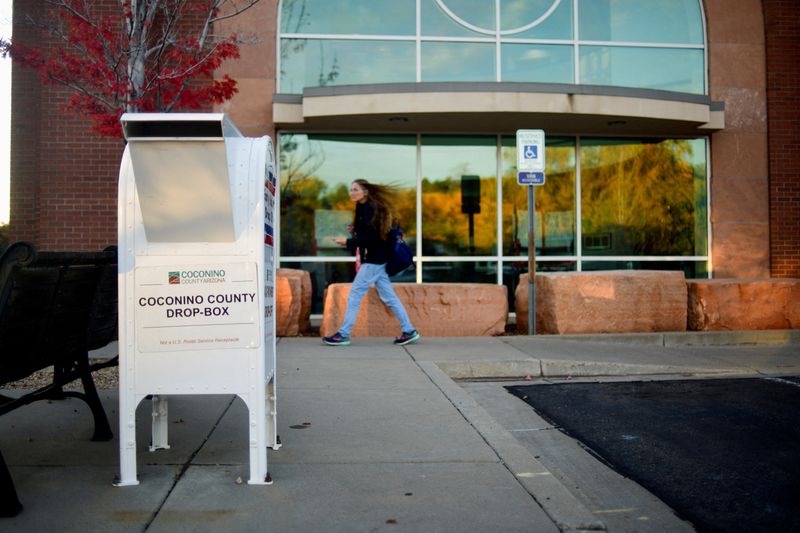 © Reuters. FILE PHOTO: A view of a Coconino County drop box which is used to accept early voting ballots outside the Coconino County Recorder’s office, which has made several security improvements including boulders lining the building, in Flagstaff, Arizona, U.S.,

A lawsuit filed by Arizona Alliance for Retired Americans and Vote Latino alleges the private group, Clean Elections USA, and its founder Melody Jennings are attempting to “bully and intimidate lawful Arizona voters” casting early votes in the midterm elections.

Clean Elections USA describes itself as a “grassroots organization committed to election integrity.” It supports former President Donald Trump’s false claims that his 2020 defeat was the result of widespread fraud.

For months it has been recruiting volunteers for drop box tailgate parties, where followers monitor ballot drop off locations for alleged fraud.

The lawsuit was filed late on Monday in the U.S. District Court in Arizona.

Arizona’s secretary of state last week asked the U.S. Department of Justice to probe a case of possible voter intimidation after a group of people linked to Clean Elections followed and filmed a voter dropping off a ballot.

The lawsuit cites that case, as well as an Oct. 22 post on Trump’s Truth Social media platform from Jennings in which she referred to two people described in the lawsuit as armed and wearing tactical gear while watching a drop box as “our people.”

“We will take all necessary steps to stop the intimidation and harassment of seniors and all Arizonans who exercise their precious right to vote,” Saundra Cole, president of the Arizona Alliance for Retired Americans, said in a statement.

Groups falsely claiming that election fraud is a widespread problem in the United States have been urging their members to register as poll watchers and election workers, building on a campaign of harassment of election workers that began in the lead-up to the 2020 election.