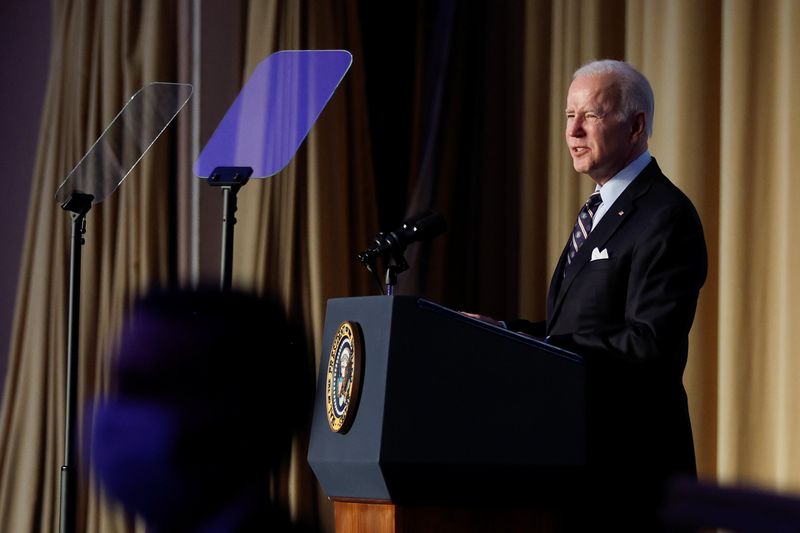 WASHINGTON (Reuters) – Thirty liberal U.S. congressional Democrats urged President Joe Biden on Monday to shift his strategy for the Russia-Ukraine war by pursuing a negotiated settlement along with his current provision of military and economic support to Kyiv.

“Given the destruction created by this war for Ukraine and the world, as well as the risk of catastrophic escalation, we also believe it is in the interests of Ukraine, the United States, and the world to avoid a prolonged conflict,” the 30 Democratic members of the House of Representatives said in a letter to Biden.

“For this reason, we urge you to pair the military and

economic support the United States has provided to Ukraine with a proactive diplomatic push, redoubling efforts to seek a realistic framework for a ceasefire,” the Democrats’ letter said.

Some Republicans have warned there could be tighter control of funding for Ukraine if their party wins control of Congress.

The letter was led by Representative Pramila Jayapal, who chairs the Congressional Progressive Caucus.

Asked for comment, State Department spokesperson Ned Price said: “Right now, we have heard from Ukrainian partners, repeatedly, that this war will only end through diplomacy and dialogue. We have not heard any reciprocal statement or refrain from Moscow that they are ready in good faith to engage in that diplomacy and dialogue.”

Washington has committed about $66 billion for Ukraine since Russia invaded it in late February, providing Kyiv with weapons and other military assistance, humanitarian aid and economic support.

The letter comes with just two weeks to go before Nov. 8 U.S. mid-term elections that will determine which party controls Congress.

House Republican leader Kevin McCarthy recently said there will be no “blank check” for Ukraine if Republicans win control of the chamber from Biden’s fellow Democrats, raising concerns that Republicans might choke off Ukraine aid.

However, analysts said the party was more likely to slow it down or pare it back.