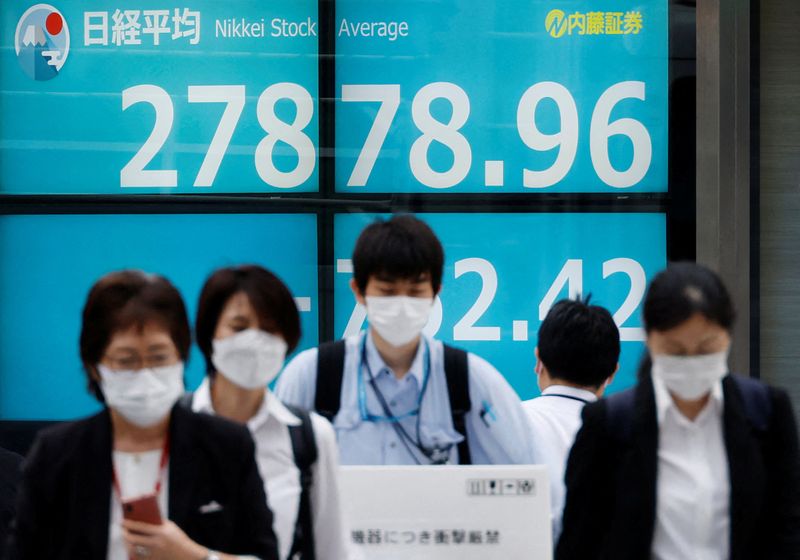 SYDNEY (Reuters) – Asian share markets were tense on Thursday and the dollar held on to its overnight gains before the big test of a U.S. consumer inflation report, while market sentiment took a dive as the likely collapse of a major crypto exchange spooked investors.

With no final results available from the U.S. mid-term elections, investors were turning to the upcoming inflation data later in the day, which are likely to show a decline in both the monthly and yearly core numbers for October to 0.5% and 6.5%, respectively, according to a Reuters poll.

China is again grappling with a COVID surge, with the southern metropolis of Guangzhou reporting thousands of cases. Apple Inc (NASDAQ:) supplier Foxconn plans to update its fourth-quarter outlook on Thursday, after strict COVID curbs remained in place at its major plant in China despite the lifting of a lockdown.

“While inflation globally has peaked, the cooling is not sufficiently large or broad-based to bring rate hiking cycles to a convincing conclusion, in our view,” said analysts at J.P. Morgan.

Still, some central banks in both developed and emerging markets had become dovish as they worried about monetary tightening pushing down economic growth, the analysts noted.

The futures market currently shows investors believe the target U.S. federal funds rate will peak around 5.1% by next June, and the chances of a rise of 50 or 75 basis points are tilted in favour of a half-point increase next month.

Overnight on Wall Street, shares ended lower as Republican gains in midterm elections appeared more modest than some had expected. Republicans were still favoured to win control of the House of Representatives but key races were too close to call.

In the crypto world, bitcoin clawed back some ground in early trade on Thursday, after tumbling for two straight sessions to its lowest level since late 2020.

Binance, the world’s biggest crypto exchange, said late on Wednesday that it had decided not to acquire smaller rival FTX, which has grappled with a severe liquidity crunch and faced bankruptcy without more capital.

“You can’t deny the growing correlation between bitcoin and risk assets. The FTX news is having an outsized effect on asset prices,” said Stephen Innes, managing partner at SPI Asset Management.

” spillovers are not negligible, and given how widely crypto coins are held, it could mean more forced liquidation of other assets to cover margin calls as long position investors were massively wrong-footed.”

The U.S. dollar on Thursday held onto its most of its gains overnight against a basket of currencies.

The sterling rose 0.2% against the greenback, after tumbling 1.6% in the previous session.

In commodities, oil prices continued to retreat on Thursday, after tumbling about 3% in the previous session on fears of demand from China and rising stocks.