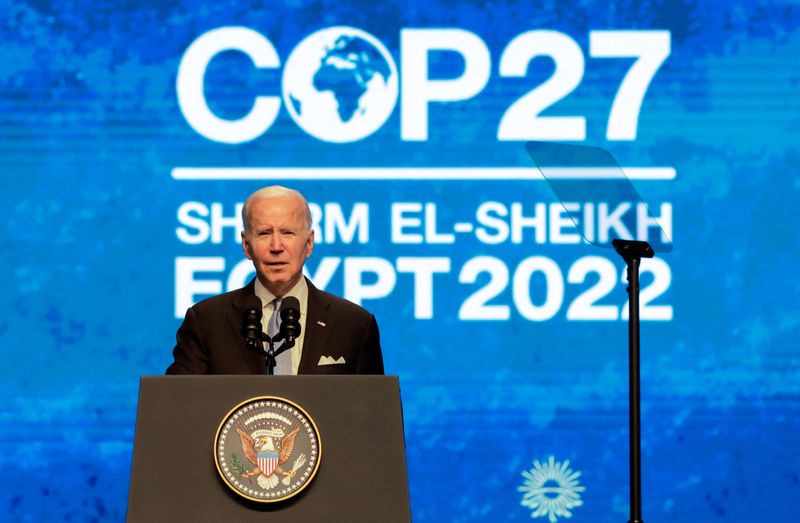 By William James and Nandita Bose

SHARM EL-SHEIKH, Egypt (Reuters) – U.S. President Joe Biden told the COP27 climate conference in Egypt on Friday that global warming posed an existential threat to the planet and promised the United States would meet its targets for fighting it.

His speech was intended pump up global ambition to prevent the worst of climate change, even as a slew of other crises – from a land war in Europe to rampant inflation – distract international focus.

“The climate crisis is about human security, economic security, environmental security, national security, and the very life of the planet,” Biden told a crowded room of delegates at the U.N. summit in the seaside resort town of Sharm el-Sheikh.

Prior to his arrival, Biden’s administration unveiled a domestic plan to crack down on the U.S. oil and gas industry’s emissions of methane, one of the most powerful greenhouse gases. The move defied months of lobbying by drillers.

Washington and the EU also issued a joint declaration alongside Japan, Canada, Norway, Singapore and Britain pledging more action on oil industry methane. That declaration was meant to build on an international deal launched last year and since signed by around 130 nations to cut economy-wide emissions 30% this decade.

“Cutting methane by at least 30% by 2030 can be our best chance keep within reach 1.5 degrees Celsius,” Biden said, referring to the central goal of the 2015 Paris Agreement to limit the global temperature rise.

Biden said global crises, including the Russian invasion of Ukraine, were not an excuse to lower climate ambition.

“Against this backdrop, it’s more urgent than ever that we double down on our climate commitments. Russia’s war only enhances the urgency of the need to transition the world off its dependence on fossil fuels,” he said.

The announcements come under a cloud of skepticism that world governments are doing enough to address the climate challenge.

A U.N. report released last week showed global emissions on track to rise 10.6% by 2030 from 2010 levels, even as devastating storms, droughts, wildfires and floods are already inflict billions of dollars in damage worldwide.

Scientists say emissions must instead drop 43% by that time to limit global warming to 1.5 C above pre-industrial temperatures as targeted by the Paris Agreement of 2015. Above that threshold, climate change risks start spinning out of control.

Many countries, including the United States and members of the European Union, have also been calling for a near-term increase in the supply of fossil fuels to bring down consumer energy prices that spiked after Russia’s Feb. 24 invasion of Ukraine.

Washington has repeatedly said its calls to boost oil and gas production do not conflict with its longer-term ambition to decarbonize the U.S. economy.

During his speech, Biden also promised an increase in funding to help other countries embrace the energy transition and adapt and prepare for the impacts of a warmer world.

That issue has been a sore point at the talks; wealthy nations have so far failed to fully deliver $100 billion promised annually for climate adaptation. Last year’s transfer came to only about $83 billion.

“He announced a slew of new climate programs, but he couldn’t deliver what the developing world most wants — enough money to adapt to climate extremes,” said Alice Hill of the Climate Crisis Advisory Group and a former Obama administration official.

She pointed out that Biden will need the U.S. Congress to boost that funding, which could become more difficult after his Democratic party lost seats in this week’s midterm elections.

“It’s radio silence on loss and damage finance,” Singh said, calling Biden “out of touch with the reality of the climate crisis.”

Human rights activists have criticized U.N. organizers for holding the COP27 in Egypt, whose government has been accused of abuses since a 2013 military overthrow of its first democratically elected president.

Upon Biden’s arrival, Egypt’s President Abdel Fattah al-Sisi told him that Egypt has launched a national strategy for human rights and is keen to develop in that regard.