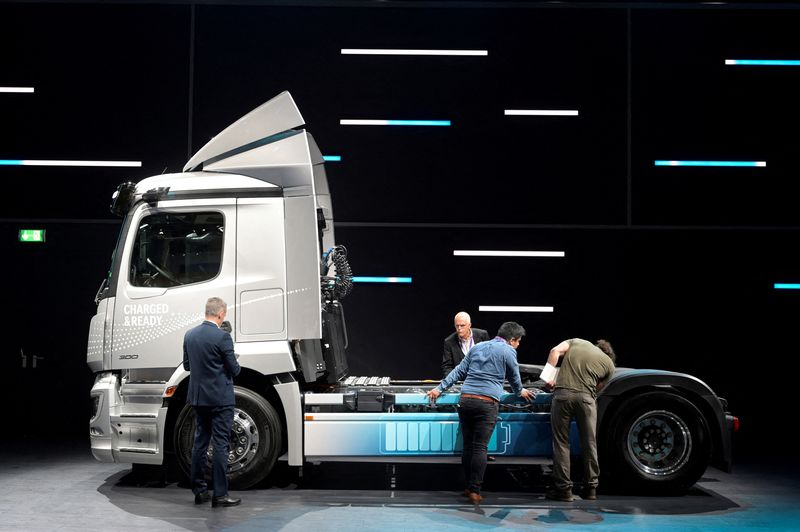 © Reuters. FILE PHOTO: Members of the media stand beside an electric driven Actros truck at the booth of German truckmaker Daimler Truck at the IAA Transportation fair, which will open its doors to the public on September 20, 2022, in Hanover, Germany, September 19,

BERLIN (Reuters) -Daimler Truck reported a 27% jump in third-quarter unit sales to nearly 135,000 on Friday as the chip shortage eased, but warned underinvestment in other parts of the supply chain was still causing shortages in everything from nuts and bolts to tyres.

“Overall the supply chain is somehow broken,” Chief Financial Officer Jochen Goetz said on an analyst call. “The market picked up super quickly …. The investments not taken a few years back mean some smaller suppliers are not able to ramp up as fast as we need to.”

Hitting the truck and bus maker’s target of reducing fixed costs 15% from 2019 levels by 2025 was more challenging in today’s inflationary environment, Goetz said.

Incoming orders at the company were down 18% on a year before in the three months ended Sept. 30, and down 14% this year so far, a statement showed.

The company was restricting its acceptance of orders in Europe next year to have some room to manoeuvre, Goetz said, but in the United States books were open for the full year.

The jump in earnings was highest in Europe at 316% from the same quarter last year, compared with 111% in North America, traditionally Daimler (OTC:) Truck’s strongest market.

In Asia, however, where a depressed Chinese market prompted the company to lower its regional adjusted earnings margin last quarter to 1% to 3% from 3% to 5%, earnings fell 63% even as revenues and unit sales increased.

This was partly due to restrictions in Japan on increasing prices on existing orders, Goetz said.

Sales of Daimler Buses, which did not grow at all in 2021, are up 18% this year so far and the company expects the coach market to bounce back in 2023.