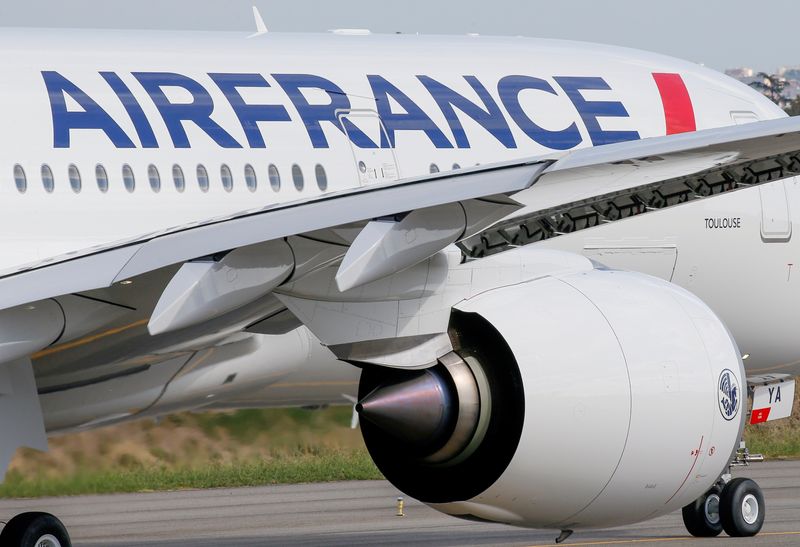 © Reuters. FILE PHOTO: The first Air France Airbus A350 prepares to take off after a ceremony at the aircraft builder’s headquarters in Colomiers near Toulouse, France, September 27, 2019. REUTERS/Regis Duvignau

PARIS (Reuters) -Air France-KLM said on Wednesday it was offering subordinated bonds convertible into new shares for 300 million euros ($312 million) to strengthen its capital and pay back state aid, sending its shares plummeting.

The shares plunged 13% in early trading as the issue dilutes current shareholders in Air France if the bonds are converted into new shares unless they buy into it. They were down 8.3% at 1.2840 euros by 0845 GMT.

Air France said in February that it was considering options for a capital raising of up to 4 billion euros, including a rights issue and quasi equity debt issues. The operation announced on Wednesday is part of that plan.

“This transaction marks a further step in the group’s initiatives to accelerate the repayment of the French state aid, continue to support the strengthening of equity capital, and help optimise financial costs,” the company said in a statement.

The bonds, which can also be exchanged with existing Air France shares, will be offered through a placement to qualified investors, the airline said.

Air France-KLM received 10.4 billion euros in support in 2020 when the coronavirus pandemic hit, including through direct French and Dutch state loans.

The airline said shipping company and existing Air France investor CMA CGM, which owns a 9% stake, had expressed the intention to participate to the placement pro-rata to its current shareholding.

Neither the French or the Dutch state were taking part in the bond issuance, according to Dutch finance minister Sigrid Kaag.

“The company is not aware of any subscription intention from its other main shareholders,” Air France said.

In a letter to parliament, Kaag said that the Dutch state’s 9.34% stake in the airline, would be diluted to 8.66% if the new bonds are converted into shares.

“While most of the financial restructuring is behind it, during 2022 and 2023 Air France KLM (OTC:) will contemplate possible hybrid bond issuance up to 1.2 bln euros, subject to market conditions,” said Stephen Furlong, senior equity analyst at

“Today’s subordinated undated bonds convertible is part of that. Dilution would represent approximately 6.8% of the outstanding share capital, if the company decided to exclusively deliver new shares upon conversion,” he said.

That potential dilution and fears of an escalation in the Ukraine war after a missile blast in NATO-member Poland were behind the share fall, he added.