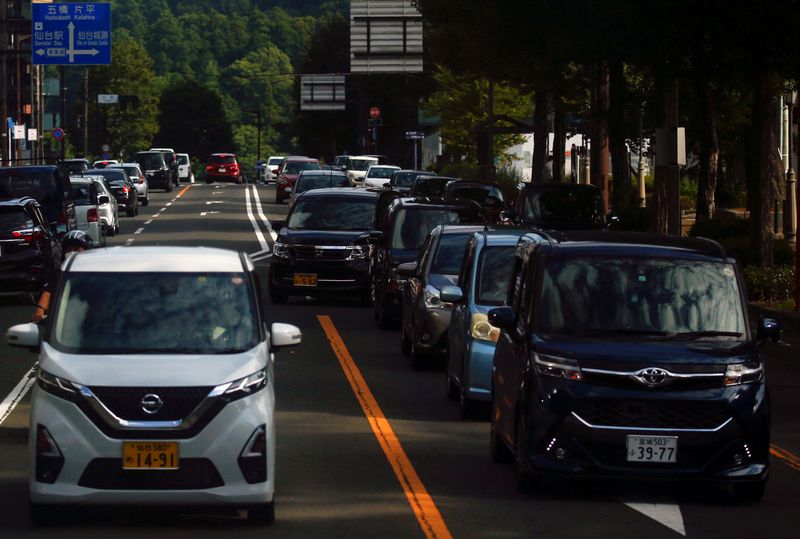 © Reuters. FILE PHOTO: Cars driving during a rush hour are seen through the window of a special bus transporting journalists to the Miyagi Stadium during of the Tokyo 2020 Olympic Games in Sendai, the capital city of Miyagi, Japan, July 25, 2021. REUTERS/Amr Abdalla

“They are thinking very innovatively what they can do, and that’s creating a lot of (investment) opportunities for private equity,” Terasaka said, pointing to Carlyle’s global business networks, which its portfolio companies could tap to find potential partners abroad.

The Japanese auto industry used to draw strengths from its decades-old keiretsu system – a hierarchical pyramid of equity-interlocked suppliers with automakers sitting atop and ensuring business security.

But the shift to EVs, which require fewer parts but different expertise, such as software engineering, will likely reshape Japan’s core industry, analysts say.

Automakers might not be able to support all kinds of keiretsu companies anymore, Terasaka said, adding that he anticipated changes to how the keiretsu system operated.

Brian Bernasek, co-head of Carlyle’s U.S. buyout and growth team, said in the same interview that the firm could help portfolio companies expand overseas by supporting them in global talent search, digitalisation, procurement and regulatory compliance.

The private equity industry “has evolved over the last 10 to 20 years from where there was more of a focus on costs,” Bernasek said.

“Today, there’s much more focus on how you grow the business, bring digital tools, different approaches to go to market, more strategies around pricing and product rationalization,” he added.