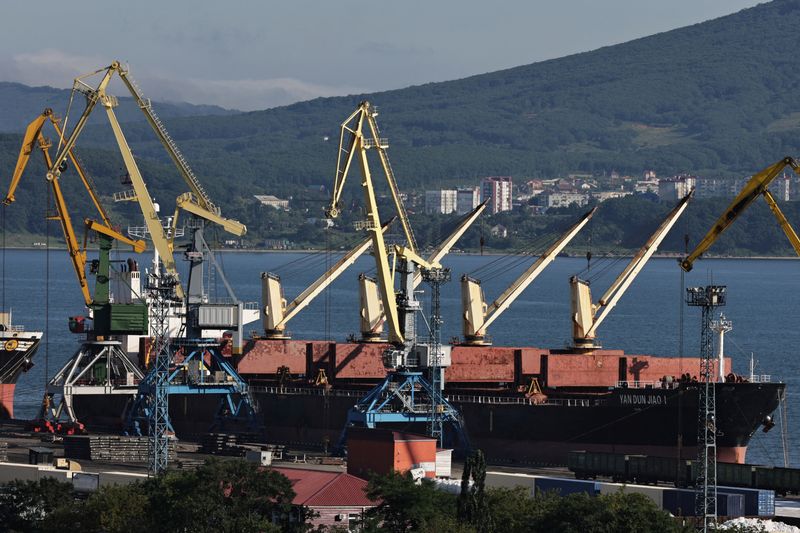 © Reuters. A view shows the Yan Dun Jiao 1 bulk carrier in the Vostochny container port in the shore of Nakhodka Bay near the port city of Nakhodka, Russia August 12, 2022. REUTERS/Tatiana Meel

U.S. West Texas Intermediate (WTI) crude futures were down $1.66, or 2.1%, at $76.28 a barrel. There was no WTI settlement on Thursday due to the U.S. Thanksgiving holiday and trading volumes remained low.

“Because there’s light volume after the holiday, we’re giving up some of the gains here a bit,” said Phil Flynn, an analyst at Price Futures group.

Both contracts posted their third consecutive weekly declines after hitting 10-month lows this week. Brent ended the week down 4.6%, while WTI fell 4.7%.

For two-month spreads, Brent and WTI’s structures even dipped into contango this week, implying oversupply with near-term delivery contracts priced below later deliveries.

China, the world’s top oil importer, on Friday reported a new daily record for COVID-19 infections, as cities across the country continued to enforce mobility measures and other curbs to control outbreaks.

This is starting to hit fuel demand, with traffic drifting down and implied oil demand around 1 million barrels per day lower than average, an ANZ note showed.

Meanwhile, G7 and European Union diplomats have been discussing a Russian oil price cap between $65 and $70 a barrel, but an agreement has still not been reached. A meeting of European Union government representatives, scheduled for Friday evening to discuss the proposal, was cancelled, EU diplomats said.

The aim is to limit revenue to fund Moscow’s military offensive in Ukraine without disrupting global oil markets, but the proposed level is broadly in line with what Asian buyers are already paying.

Poland is seeking German support to slap EU sanctions on the Polish-German section of the Druzhba crude pipeline so Warsaw can abandon a deal to buy Russian oil next year without paying penalties, two sources familiar with the talks said.

Trading is expected to remain cautious ahead of an agreement on the price cap, due to come into effect on Dec. 5 when an EU ban on Russian crude kicks off, and ahead of the next meeting of the Organization of the Petroleum Exporting Countries and allies on Dec. 4.