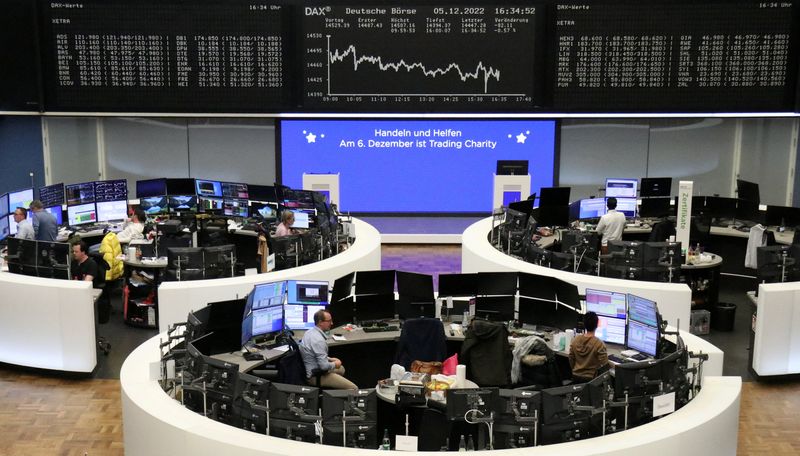 (Corrects team name to Switzerland instead of Spain in second paragraph)

While European shares ended lower for the third straight session on Tuesday, spooked by recession worries, another hat-trick dominated the World Cup a few hours later.

Three goals by Portugal’s 21-year-old Goncalo Ramos against Switzerland in his first World Cup sent his side through to the quarter-finals for the first time in 16 years. And a 3-0 shootout win by Morocco against former champions Spain meant that Morocco became the first Arab nation ever to qualify for the tournament’s quarter-finals.

In the arena of European stocks, there seem to be little excitement for risky assets on Wednesday, with Asian equities trading rangebound after U.S. stocks again suffered losses as markets gradually factor in sharper interest rates hikes.

For the euro zone, commentary by officials is hinting at a peak in rates but anaemic growth and stubbornly high inflation are haunting investors.

ECB policymaker Constantinos Herodotou said on Tuesday that interest rates will go up again but are now “very near” their neutral level.

Markets will focus on industrial output data due from Germany, while euro zone third-quarter GDP and employment numbers, and UK house prices are among the other economic indicators for the day.

Euro zone government bond yields dropped for the first time in three days on Tuesday in the run-up to a raft of major central bank decisions next week.

A Reuters poll of market strategists expect the dollar to rebound against most currencies over the coming months, with the growing threat of recession in the U.S. and elsewhere keeping it firm in 2023 through safe-haven flows.

On the corporate front, Airbus gave up a numerical forecast for jet deliveries and a date for its key production goal but retained its financial targets as it limped towards the end of a year battered by disruptions in factories and supply chains.

And British Prime Minister Rishi Sunak’s government said it would ease restrictions on building onshore wind farms, heading off a revolt by his party’s lawmakers who had demanded they should be permitted with local support.

Key developments that could influence markets on Wednesday: